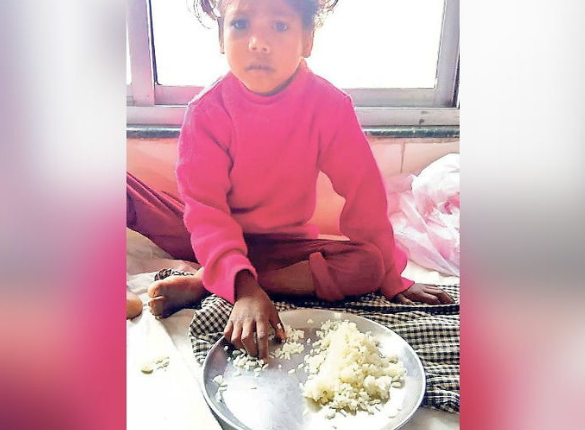 RANCHI: In a shocking incident, two minor children were served only boiled rice at a government hospital in Jharkhand, raising a big question mark over the prevailing state of affairs.

Both the children had been admitted to the Sadar hospital, Chaibasa after their parents were murdered. The children too had been injured in the attack.

Subsequently, the orphaned children were admitted to the hospital by the Childline working for children welfare.

On Sunday, the poor children, along with other patients admitted to the hospital, were served only boiled rice and nothing else. The poor children didn’t complain at that since they were hungry.

Reports said a Childline member Sunita Karuwa reported the matter to the senior hospital authorities but by the time, the children were served pulse and vegetables, they had already finished the meal since they were hungry.

Chief Minister Hemant Soren while taking the matter very seriously has directed for proper upkeep of the children, their security and education, and ordered for action against the guilty officials.

Acting on the CM’s order, the local DC rushed to the hospital and inquired into the matter. The authorities have suspended a hospital staff in this connection.

“Both the children are under the care of the Civil Surgeon and safe,” an official statement issued by the Jharkhand government said on Monday.

Almost similar incident had been reported from another hospital in Jharkhand in September 2016  when a poor woman patient with her right hand plastered after fracture injuries was served foods on the floor by the hospital staffs as she didn’t have the plates.

The poor woman identified as Palmati Devi, in her tattered clothes, had no option but to eat flood on the ground.

The shocking incident took place in the Ortho ward of Rajendra Institute of Medical Sciences, Ranchi, a premier government hospital in Jharkhand, where she was admitted.

Nitish under tremendous pressure over…