It’s confirmed Nitish and BJP had conspired against Lalu to send him to jail: Tejashwi 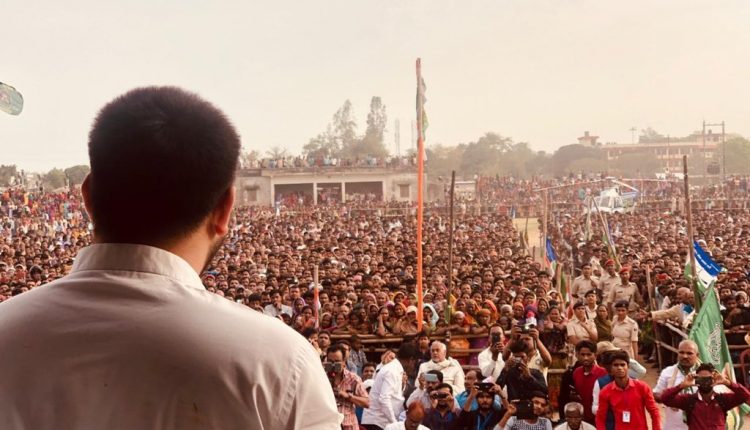 PATNA: Bihar opposition leader and RJD legislator Tejashwi Yadav on Tuesday accused chief minister Nitish Kumar of conspiring against his father Lalu Prasad to send them to jail. Prasad, currently the national president of the RJD, is currently in Ranchi jail.

Tejashwi Yadav who is leading the party’s poll campaign in the absence of his father Lalu Prasad, more popular as Lalu Prasad Yadav, is considered his “heir apparent”.

“Nitish Kumar had said in Nalanda yesterday that he won’t allow Lalu Prasad to come out of jail. This is a kind of statement which confirms our allegations that he in the company of BJP hatched a conspiracy to send my father to jail,” Tejashwi Yadav told the media on Tuesday.

“This has exposed double face of Nitish Kumar very much,” he alleged and added the chief minister was beating his chest out of sheer desperation and threatening Lalu Prasad not to come out of jail.

The RJD leader launched frontal attacks on the chief minister after Nitish Kumar was quoted as saying at an election rally that he would not allow Lalu Prasad to come out of jail.

“Laluji will not get out of jail whatever and how much he tries for this,” Nitish Kumar was quoted as saying at an election rally that he addressed in Nalanda on Monday.

He added the RJD president was trying to come out of jail and capture power and said he was jailed for his own faults. He also claimed there was a rule of law in Bihar.

Lalu Prasad who is currently undergoing treatment at a government hospital in Ranchi under judicial custody applied for bail twice, first from the Jharkhand High Court and then from the Supreme Court, but his bail pleases were rejected.