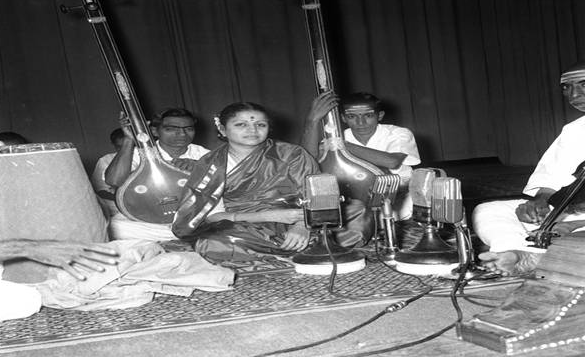 A Hundred Years ago, i.e. on September 16, 1916, ‘M.S. Subbulakshmi, the ‘Nightingale of India’, was born at Madurai in Tamil Nadu.  Her father Subramania Iyer was a practicing advocate and her mother Shanmuga Vadivu, a Veena player. At home, M.S. was affectionately called as ‘Kunjamma’.

Subbulakshmi was precocious in the matter of vocal music. Her earliest public performance was a Marathi Bhajan when she was barely eight. She had accompanied her mother to a Veena recital event; and playing on sand outside the music arena. It was then her mother announced that Subbulakshmi would perform a song. The girl, who was playing moments ago, like any girl of her age, unhesitatingly began singing that enthralled the audience. Many in the audience predicted a great future for her. They were correct.

On January 1, 1932 Subbulakshmi made her mark at Madras Music Academy programme in the presence of exponents of Carnatic vocal and instrumental music. They included virtuosos like T. N. Rajarathinam Pillai, Chembai Vaidyanatha Bhagavathar and Mysore T. Chowdiah. Subbulakshmi, in reality, had been called as a substitute performer as Ariyakkudi Ramanuja Aiyangar, the great vocalist, could not attend the programme. Subbulakshmi performance mesmerized masters and audience alike. Karaikadu Sambasiva Iyer felt Subbulakshmi had a hidden Veena in her throat. Subbulakshmi incidentally became the first women performer at Madras Music Academy Annual Conference.

Subbulakshmi also acted in several memorable films in 1930s and 40s. Her first movie ‘Seva Sadhanam’ (1938) was on social reform, a pet theme of director K. Subramanyam. On July 10, 1940 she was married to Thaigaraja Sadasivam (1902-1997), a freedom fighter and journalist, 14 years her senior. Their association was destined to last for 57 years, and become most fruitful in terms of service to music, arts and literature. In 1940 they together produced a movie Sakuntalai based on Kalidasa’s play Abhigyanam Shakuntalam. Since K. Subramanyam was unavailable, they hired Ellis Roderick Duncan (1909-2001), an American film director who directed several popular Tamil films in the 1940s without understanding a word of Tamil. The film was a hit, and songs of Subbulakshmi were rapturous.

Sadasivam wanted Subbulakshmi not to remain a provincial musical figure. He wanted her to attain national acclaim that she richly deserved. In 1943, Subbulakshmi participated in the Mumbai Vikramaditya Festival. She sang Raga Sankarabharanam, an exquisite raga, rendered in masterly style. She also sang bhajans by Tulsidas, Mira Bai, Guru Nanak that captivated the audience completely. Ustad Bade Ghulam Ali Khan described her a ‘Suswara Lakshmi’- the goddess of melodious voice.

Finding Subbulakshmi’s bhajans having traction with all sections of listeners, Sadasivam wanted to bring their magic to the silver screen. The result was the Tamil film ‘Meera’ (1945), which became a musical sensation. Based on the life of Mirabai, the 16th century devotee of Lord Krishna from Rajasthan, the film directed by Ellis Duncan ran for more than 25 weeks. Subbulakshmi, in the eponymous role of Meera (Mirabai), made a natural choice. During the film’s shooting at Dwarka, onlookers could hardly believe she was not Mirabai. Duncan felt Subbulakshmi did not act as Mirabai, but changed her soul to her being.

The Hindi version of Meera was released in Plaza Theatre of New Delhi on December 5, 1947. Amongst the audience was Lord Mountbatten, Edwina Mountbatten, Jawaharlal Nehru, R.K. Shanmugam (Finance Minister) and Sarojini Naidu. Naidu, after watching the film, said she was happily surrendering to Subbulakshmi the title ‘Nightingale of India’, which she as a poetess had held for decades. Mahatma Gandhi wanted to listen to her, and said he became Subbulakshmi’s fan, after she performed bhajans at Sevagram, Wardha.

The devotional songs of Subbulakshmi captivated people’s imagination across India. There are thousands of connoisseurs who would swear that songs of Mirabia, Kabir, Tulasi Das or Punardhar Das should be heard only in her voice. It is said that feeling aroused by her “Saroja Dhala nethri saama gaana vinodhini” in Sankarbharanam raga cannot be described in words. Subbulakshmi Mela Ragamaliga song was written by Mahavaidyanatha Sivan composed in 72 ragas on the instructions of Paramacharya Sri Chandrasekharendra Saraswati of Kanchi Kamakoti Peetham. Subbulakshmi was a bit nervous, but the Paramcharya encouragingly said ‘”Do you think you are going to sing? The Lord will sing through you”. When the recording was completed and the first disc was released, Maha Periyava blessed M.S. “Your glory will be eternal as long as the Sun and Moon are in the sky.”

Sadasivam passed away in 1997 at the ripe age of 95. Subbulakshmi felt her life completely darkened as their 57 year old companionship ended. She became averse to food, unable to sleep, reduced her singing and avoided going out. But within a few months she had something to cheer about. She had won her Padma Bhushan in 1954 and Padma Vibhushan in 1975. Now the Government of India declared Bharat Ratna for her. The highest civilian award was conferred upon her by the then President K.R. Narayanan on January 14, 1998 at a function held in Rashtrapati Bhavan in New Delhi.

Subbulakshmi’s was deeply immersed in the devotional music of Saint Thyagaraja. The only time she was out of touch of Thyagraja’s bhajans were in 1940s when was a part of a Tamil Isai Movement to popularize Tamil music. Thyagraja’s bhajans, though most popular in Tamil Nadu, are actually in Telugu and some Sanskrit. But she could not remain far from Thyagraja’s songs for long. She reverted to them, as they appealed to her soul.

Subbulakshmi passed away on December 11, 2004 at the age of 88. She had mesmerized audiences both in India and abroad with her music. As a person she was humble and had a deep compassion for the poor. She represented the soul of Indian music.

*Author V Srinivasan popularly known as VSV is a prolific writer and renowned Carnatic music critic. He has interviewed MS several times during her music journey and has also written her biography.

The views expressed in the Article are his personal.