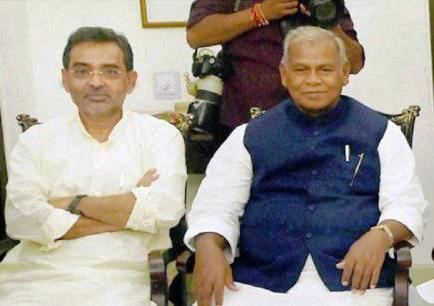 Right now, Hindu nationalist Shiv Sena headed by Uddhav Bal Keshav Thackeray has already announced to dump the NDA while Telugu Desam Party led by N Chandrababu Naidu is contemplating to walk out of the NDA.

Amid such reports, former chief minister Jitan Ram Manjhi, a Dalit politician, has put the Bhartiya Janata Party (BJP) in fresh trouble by staking claims over 50 seats for assembly elections in BIhar. The next assembly election strangely is due in 2020.

“We will be able to take important decision only if we contest elections on at least 50 seats,” Manjhi who heads the Hindustani Awam Morcha (HAM) told a function in Patna in Indian state of Bihar on Saturday. HAM is a key ally of the BJP-led NDA which rules India.

He added there would be two deputy chief ministers, one from the Dalit and the other from the Muslim community, if his government comes to power in the state.

He accused the ruling Nitish Kumar government in Bihar of ignoring the interests of the minority community people in the state.

Like him, Rashtriya Lok Samata party (RLSP) which is led by federal minister for human resources development Upendra Kushwaha too has demanded 10 seats to contest the next Lok Sabha elections.

Kushwaha’s party which has the main political base in Bihar is another key constituent of the NDA.

In the last 2014 Lok Sabha elections, the RLSP had won three seats out of four it had contested. Bihar has a total of 40 LS seats.

Villagers eliminate whole family of a snake, get photographed with them