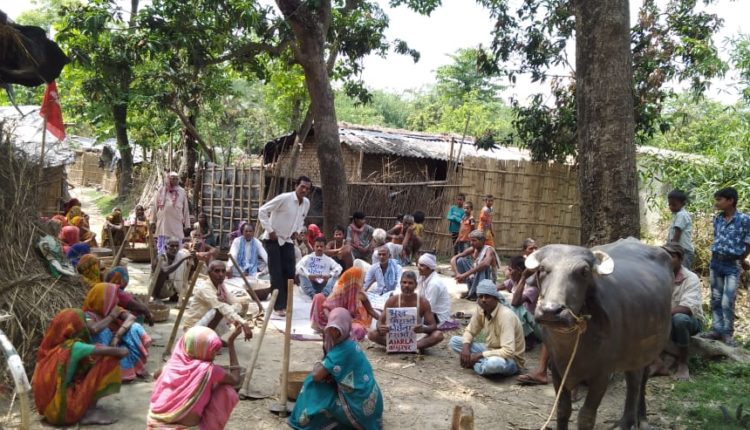 PATNA—A huge workforce left jobless by the nation-wide lockdown enforced by the Indian government to check spread of the deadly coronavirus disease or Covid-19 is battling hard for survival with food stuffs scarcely available to them.

Desperate villagers are snatching money, robbing food grains from government-run ration shops and angrily protesting on the streets seeking food even as the black-marketing of food grains remains the issue of another concern.

A judge in India’s Bihar state was hugely shocked and surprised when a 16-year-old boy was produced before him in the court on April 17 on the charge of theft. The judge Manvendra Mishra was moved to pity when the boy told him he had snatched a purse from a woman shopper in the locality to buy food stuffs for his widowed mother and younger brother who had not eaten for days due to lockdown. The family stays at a distant village which falls in Nalanda, the home district of Bihar chief minister Nitish Kumar.

“I used to work in roadside hotels, someone’s field or as a daily wager but the lockdown robbed off my all source of income. My family was on the brink of starvation and hence I was compelled to commit the theft,” the boy told the judge. He was caught on the basis of CCTV footages.

The compassionate judge not only acquitted the teenager of the theft charges but also directed the local officials to instantly provide food, clothes and benefits of other welfare schemes to his family. “As directed by the court, we have provided food grains, clothes, cash and are also trying to give benefits of welfare schemes. Right now the family lives in a thatched hut,” a local block development officer Pridarshi RP told the media.

The responsibility to take care of his mother Gayatri Devi, 50, and his younger brother fell on the shoulder of the little boy (name being withheld due to legal compulsions) after his father Bachu Yadav died recently. The boy somehow eked out the livelihood of his family by working in roadside hotels or farmlands but was left jobless after lockdown.

This found him in deep financial crisis and he didn’t have money to buy foods. “Now we are taking care of his family. The court has sought action taken report from us within four months,” local senior police official Sharad Kumar Ranjan said.

In Bhojpur, another district in Bihar, angry villagers robbed bags of food grains from a government-run ration shop on April 12 after the dealer refused to give them free ration as announced by the government. Irate villagers also assaulted the dealer who was accused of supplying the free ration meant for poor villagers in the markets.

“We have been told some villagers plundered food grains from the ration shop. We have registered a case against nine persons and conducting raids to nab the absconding accused,” local police official Jyoti Kumari confirmed.

Similar incident was reported from another Bihar district of Siwan where hungry villagers robbed grain stocks from a mini truck last week. The police have arrested five villagers in this regard. People are also angry that they are being supplied rotten grains while the good quality foods meant for distribution among the poor are being sold in the market.

A Bihar government official said they have taken serious action ration shop dealers involved in such acts. “We have initiated actions against 267 public distribution shop dealers so far,” Bihar’s information and public relations secretary Anupam Kumar said. He informed the government has registered cases against 144 dealers and suspended licence of 127 dealers while the licence of 36 dealers has been cancelled.

Even more shocking incident took place on March 29 in Kota city of northern Indian state of Rajasthan where desperate villagers plundered flour bags being carried on a mini truck. A video of the incident which has gone viral in the social media shows men, women and children riding on bikes chasing the mini truck carrying wheat flour bags on a deserted road and then robbing the food stuffs once the vehicle halts. Police have arrested 10 persons in this regard.

In Bihar, the government has announced free ration to 16.8 million ration card holders and also credited Rs1,000 to the bank account of every poor left jobless by the lockdown or stuck in various parts of India. In Jharkhand state, the state government has opened hotels to provide food to the poor.

A report of the state food, public distribution and consumer affairs said food grains have been distributed among 377,000 people so far while around seven million people have been provided cooked food at various relief camps being run by the government.

Indian government has said there is nothing to worry as it has enough food to feed the poor. “There is absolutely no need to worry as far as availability of wheat and rice is concerned in any part of India. We will have 100 million tons in warehouse by the end of April,” state-run Food Corporation of India (FCI) chairman DV Prasad has told the media.

Another senior official from the Federal Ministry of Consumer Affairs, Food and Public Distribution said the Indian government has decided to provide additional foodgrain @5kg a person/month free of cost for three months from April to June, 2020 to 800 million poor as a part of Economic Response to Covid-19 to ameliorate the hardship faced by the poor due to economic disruption caused by Corona.

(The author is a senior journalist based at Patna, India)