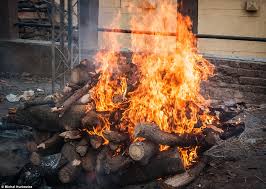 PATNA: A middle-aged villager from Bihar cremated twice during his lifetime returned home in the weekend, much to everyone’s joy.

The bizarre incident took place at Rajanpur-Ramtoli in Saharsa district on Sunday.

Shambhu Ram’s family members had cremated his effigy on May 20 this year presuming he is dead after getting the information that he had met with a road accident in Delhi.

Subsequently, his last rites were conducted at the village during which the villagers were also served feast—a kind of Hindu rituals to ensure pace to the departed soul. On Sunday, however, he suddenly appeared at the village, bringing a mix feeling of both joy and fear.

Reports said initially they screamed out of panic taking him as “ghost” but when he convinced he did not die in the road accident, they all erupted into joy.

Earlier as well, his family members had cremated his effigy, presuming him to be dead when he did not return home for over a decade. He had left for trouble-torn Kashmir to eke out living.

Believing he is no more, his wife Lalia Devi even got married to another villager and started life afresh. Suddenly, however, Ram returned his home in 2007.