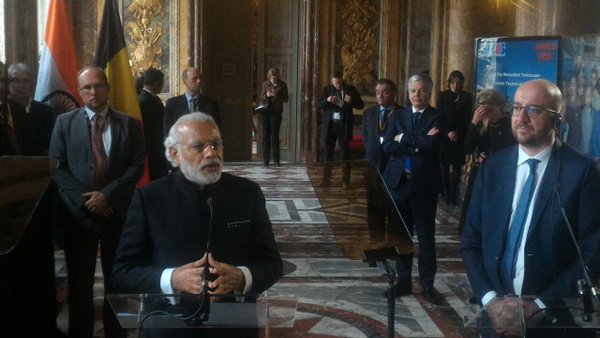 PATNA: Indian Prime Minister Narendra Modi has exhorted the world community to join fight against terrorism, describing it as a challenge to humanity.

Addressing the Indian Community in Brussels, the PM said despite the huge threat, the world is not able to deliver a proportionate response to terror, and terms such as “good terrorism” and “bad terrorism”, end up strengthening it.

He described how India has faced this scourge for forty years, which many described as a mere law and order problem for a long time, until 9/11 happened.

Declaring that India would not bow to terror, he said he had spoken to many world leaders and emphasized the need to delink religion from terror. He recalled the Global Sufi Conference in New Delhi recently, where liberal Islamic scholars had denounced terrorism. This approach, he added, was essential to stop radicalization.

The PM regretted that the United Nations had not been able to come up with a structured response to terrorism. He said the UN has not been able to fulfill its responsibility in this regard, and had not come up with a suitable resolution. He warned that institutions which do not evolve appropriate responses to emerging situations, risked irrelevance.

The Prime Minister also mentioned that the whole world which is passing through an economic crisis had recognized India as a ray of hope.

He said India has become the fastest growing large economy in the world, and this is not because of good fortune but as a result of good intentions and sound policies.

The Prime Minister said the Land Boundary Agreement with Bangladesh was an example of how contentious issues could be resolved peacefully. He mentioned the Narendra Modi App, and suggestions he had received on India-Belgium relations.

The Prime Minister also mentioned recent decisions taken for the benefit of NRIs.

Bihar erupts in joy as liquor ban comes into force