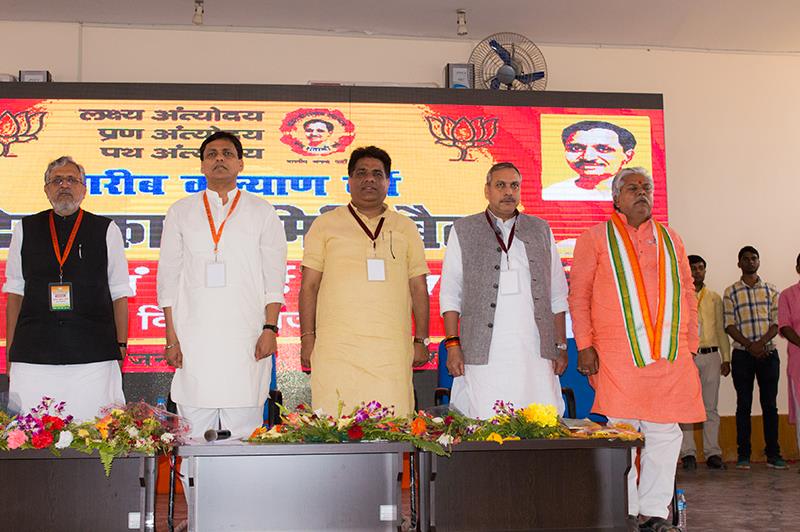 PATNA: The principal opposition Bhartiya Janata Party (BJP) in Bihar has launched an intensive campaign to woo the Muslim voters ahead of the next 2019 Lok sabha polls. Bihar with 40 Lok Sabha seats has always played a significant role in deciding the fate of a government in New Delhi.

As part of this strategy, the BJP has been holding its state executive committee meetings in areas dominated by members of minority communities and raising issues affecting Muslim voters to bring them to the party fold.

The issue of the Muslim community’s welfare again figured during the three-day executive committee meeting of the BJP which began in Kishanganj on Tuesday.

The selection of this area as a venue for the meeting assumes significance as this district bordering Nepal in the north and Bangladesh in the east is predominantly Muslim.

According to experts, the BJP is working on a twin strategy to win the confidence of the Muslim community.

While on the one hand, it is trying to woo Muslim men by talking about their development while playing down the issues of cattle smuggling and Bangladeshi infiltration which for long have led to sharp polarisation of votes.

On the other hand, it has raised the issue of “triple talaq” to gain the sympathy of Muslim women.

The two issues proved a big hit during the recently-held assembly elections in India’s most populous state of Uttar Pradesh and the BJP looks impatient to replicate that strategy in Bihar too.

“Although we want [to cater for] the welfare of the entire Muslim community, we are very much concerned about the rights of Muslim women and want a solution form the community itself,” former state BJP chief Mangal Pandey told the media in an oblique reference to the raging controversy over “Triple Talaq”.

A firebrand BJP leader and federal minister Giriraj Singh went a step further and sought a clarification from the Muslim community as to why they should not vote for the party which believes in “development of all”.

“Why will Muslims not vote for us? We have never harmed them. A road is built for all and not for any community. Those who do not love the nation only raise such question,” he asked adding the BJP had never pursued any discrimination.

The meeting proved to be a grand success as the party led by new president Nityanand Rai, a Yadav by caste, was able to connect with the general masses by raising the issue of Shahabuddin. It was the result of the aggressive campaign again the RJD don that the latter eventually landed in Tihar jail in Delhi, it is believed.

The BJP has opted for a Yadav as the state party unit chief to cut into the Yadav votes of the RJD which banks on Muslim-Yadav (M-Y) equation. In the last 2015 assembly elections, the party lost the polls to Nitish Kumar-led GA as the latter hugely raised the issue of Prime Minister Narendra Modi government’s alleged hidden agenda to end the reservation of backwards/Dalit class people.

The other side of total prohibition: Rats turn ‘alcoholic’ in dry Bihar!