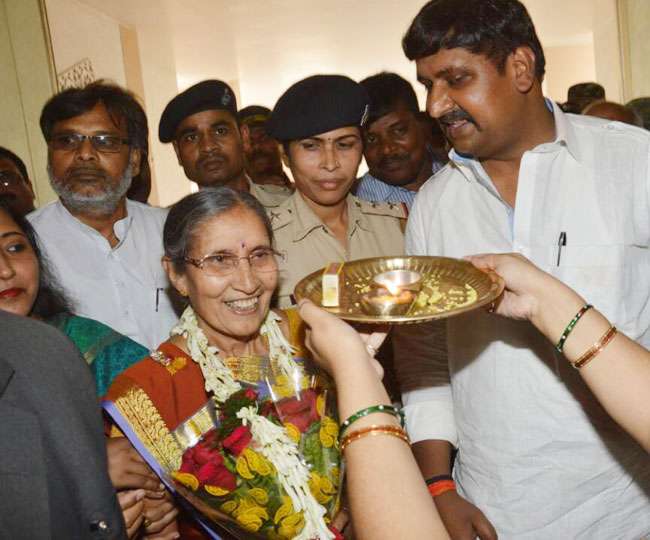 PATNA: Prime Minister Narendra Modi may be ruling the hearts of millions through his mesmerizing oratorical skills but now his estranged wife Jashoda Ben has proved she is not much inferior to him.

During her three-day visit to Bihar, she won hearts of the audience through her innocence, plain talks and her focus on social issues. This was her first visit to the state.

At the functions organized in Patna and Begusarai, she gave a clarion call for saving the girl children and also empowering them for proper development of a nation.

“I urge you all to impart proper education to girl children. If a girl studies, two families get literate,” Jashoda Ben told a function in Begusarai yesterday.

Mrs Ben who was accompanied with her brother Ashok Modi skirted political issues saying she doesn’t understand politics. “I understand only the society,” she observed, seeking for empowerment of women class.

She asserted the country would move forward only when the daughters are given due respect and imparted education. She made similar appeals shortly after her arrival in Patna on Saturday.

Against all expectations, however, her three-day-visit remained a low-key affair with majority of senior Bhartiya Janata Party (BJP) leaders staying away from her or her functions she addressed.

It was only small-time leaders who paid visits to her. Yet, she appeared overwhelmed with the warm welcome accorded to her on her maiden trip to the state.

“She is an embodiment of sacrifice and has no political ambitions as such,” remarked Ashok Modi, brother of Mrs Ben who is accompanying her on her Bihar visit.

His observation assumes significance given the fact that she stays alone away from her PM husband, surviving on a monthly pension of little over Rs 14,000. She is a retired school teacher.

In a recent interview to a national daily, she revealed how she was married with Mr Modi when she was only 17 but got “separated” only three years later.

Critics have accused Modi of “deserting” his wife after he joined the Rashtriya Swayamsevak Sangh (RSS) which prizes celibacy.

Mrs Ben also displayed no security frills. There was no Special Protection Group (SPG) people guarding her during her visit to the state here and it was only the state police which provided security to the lady.