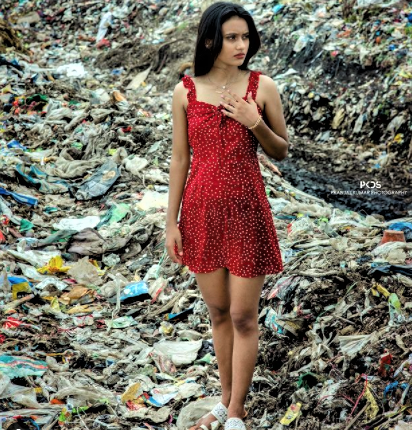 PATNA— A young model cat-walked on mounds of rotting garbage in the Indian state of Jharkhand to draw the attention of the government towards serious health and environment hazards it had been posing to humanity.

The model identified as Surabhi, who has been “Miss Jharkhand”, cat-walked on garbage for close to 30 minutes, ‘risking her own life.’ She suffered serious skin infections in her feet as she cat-walked on the garbage containing used plastic bottles, sanitary pads, wrappers and polythene bags, emitting foul odour in the locality.

The local municipal staff have been dumping the waste generated from the capital in the Jhiri locality of Ranchi for years, resulting in mountains of garbage. The whole situation has turned critical since the municipal administration has done nothing for its disposal. This has turned the life of the local residents into a veritable hell.

The video has now gone viral on social media. She chose to wear red to alert the authorities of the serious danger.

“Initially, I got terrified when I began my cat-walk since my feet got stuck in the sticky garbage quite many times but I didn’t give up. I ignored my own fears about skin and other infections as I wanted to bring the issue to the knowledge of the authorities,” Surabhi said. According to her, authorities had not bothered to install processing plants to recycle the garbage causing serious health and environmental problems.

She said it was really difficult to walk on the garbage dump but she set aside her own concerns for a larger perspective. “I encountered a lot of troubles during the shoot. My feet were getting sunk in the garbage, I suffered skin infections after the shoot and had to consult a doctor for treatment,” revealed Surabhi who is a grade 12 pass-out.

The shooting was done by a fashion photographer using drones for aerial videos and still photography. “Over the years, unsafe dumping of all sorts of garbage at this place has made people prone to various diseases. Such is the situation that the people passing through the areas can’t bear the stench and had to shut the window screens of the cars,” said Pranjal Kumar who shot the model walking on the garbage.

According to an estimate, the municipal authorities have been dumping around 18,000 tonnes of waste every month at this particular place located on the city’s outskirts. The dumping has been continuing for the past 10 years which has resulted in accumulation of more than 2.1 million tonnes of garbage, causing problems to a large population. The situation becomes horrible during the rainy season when the wastes start rotting and emit a foul smell.

Ranchi Municipal commissioner Mukesh Kumar said the administration had chalked out a plan to recycle the wastes. “Tenders have been issued for setting up a waste recycling plant and the process for this is already underway. We have plans to generate power and prepare plastic sheets from the wastes,” municipal commissioner told the local media on Tuesday.

Ranchi, the capital of eastern Jharkhand state with an urban population of 1.5 million, has ambient air pollution levels that are seven times higher than World Health Organization (WHO) recommended standards, according to studies.

It has also been identified by the National Clean Air Programme as one of 122 “non-attainment cities” that consistently fall short of national standards. Bad air was linked to 1.24 million deaths, or one in eight of those who died, in India’s latest nationwide pollution study.