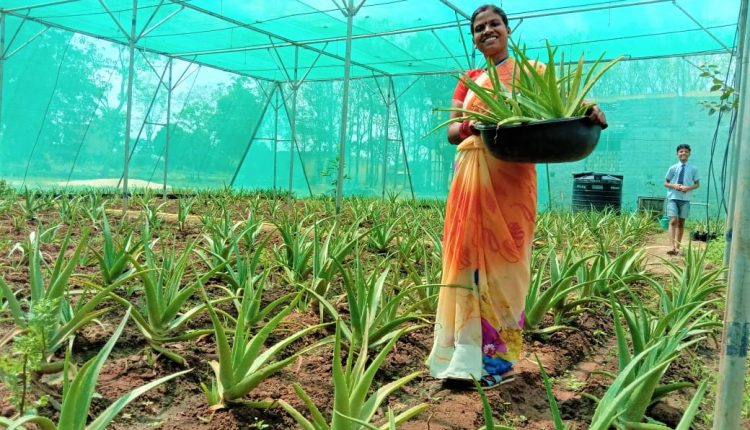 PATNA—Tribal women in Jharkhand have turned to non-traditional cultivation of Aloe Vera, a kind of medicinal plant, which has brought them joy with good financial returns.

Residents from Deori village in Jharkhand’s Ranchi district switched over to this unconventional farming in 2018 after being informed about its attractive returns by the Indian Council of Agriculture Research (ICAR) scientists. They also provided 6,000 saplings to the villagers free of cost to start with the farming.

Two years on, the village has got the tag of ‘Aloe Vera village’ because of the huge produce. The village produces some 50kg of aloe vera leaves per day.

Every villager from Deori is engaged in cultivation of this particular plant, setting aside traditional farming which not only required much attention but also a lot of investment. Each farmer is earning around Rs10,000 a month on the produce. What is interesting about this farming is that a majority of the farmers engaged in its cultivation are women.

“We were imparted training about aloe vera cultivation by the local agriculture scientists in 2018 but we didn’t show much interest in it. We gave more attention towards it following an alarming rise in its demand due to some rumours about immunity boosting by consumption of aloe vera juice during COVID-19,” said village chief and farmer Manju Kashap.

She said previously they would make petty gains by sale of local produce in the fields, such as potatoes, onion and peas but aloe vera cultivation had brought prosperity to the village. “Everyone is happy since they are making attractive gains,” she added.

According to them, they don’t have to go to the market looking for buyers. Rather, the businessmen themselves some with trucks to buy aloe vera leaves. The leaves are sold at the rate of Rs40 a kilo, while the villagers don’t have to care much about its farming.

“Aloe vera cultivation requires less attention in terms of irrigation. Also, animals neither eat nor harm the plants. So we don’t have to care much about it. Another important thing is that one sapling produces many plants,” said another farmer Bhagyamani Tirki. Currently, its cultivation is being done in some 50 acres of land.

Ranthu Oraon says once the crop is ready, traders start coming to the village with huge trucks to buy aloe vera plants. “Right now, we are not able to meet the total demand. So, we are trying to increase the areas of cultivation,” Oraon said.

Encouraged by the growing demand for this plant in the markets, the local villagers are demanding a processing plant at the village to make aloe vera juice and gel. Villagers said many traders from Rajasthan too contacted them to buy the plants.

Farmer Sukrita Kashpa said she was in a fix when she started its farming but the COVID-19 outbreaks played the trigger. “Its demand has increased multiple times post the COVID-19 period,” she said adding the people were giving good prices to buy plants for making aloe vera juice.

Aloe Vera is a cactus-like plant that grows in hot, dry climates. Historically, aloe has been used for skin conditions and was thought to improve baldness and promote wound healing. Several studies have investigated the usefulness of aloe as a dietary supplement or a topical product for health purposes in people.