Indians have reacted angrily to the horrible Odisha incident of a poor tribal villager carrying the dead body of his wife on his shoulder as he was too poor to arrange for a vehicle.

The photograph shows Dana Majhi carrying his wife Amang Dei’s body on his shoulder while his 12-year-old daughter follows him, wailing inconsolably.

The poor man walked around 10 kilometer carrying his wife’s body on his shoulder as he failed to get a vehicle to transport it from a government hospital to his home in Kalahandi. The 42-year-old woman had died of tuberculosis.

As he couldn’t get any help from the hospital authorizes, Majhi wrapped his wife body in a cloth and walked on foot, carrying it on his shoulder.

“Shame on the humanity and the system,” reacted Yashika Abhishek Gupta in the social meisa.

Another man Gulshan Chhabria said, “Complete staff should be fired”.

Said Chiranjeevmanohar Itlapuram: “It’s a colossal shame on the part of onlookers and the Odisha government which failed to provide at least an auto to carry home his wife of this hapless tribal to give some dignity to the departed soul. Government’s apathy towards underprivileged section is glaringly visible”.

“That hospital should be demolished within seconds…where are the stupid politicians and culture?” asked Saji Daniel.

Remarked another man Naveen Kumar: “I can’t control my anger after watching this. Are officials are really humans? These government need not to help the poor to live but at least let them die and give something to do proper burial”.

“I cried watching this video and news in TV. What was the one who recorded this incident doing? Couldn’t he lend a helping hand? I wish I was there to console the little girl who is aged same as my daughter,” screamed Beenu Rajesh. 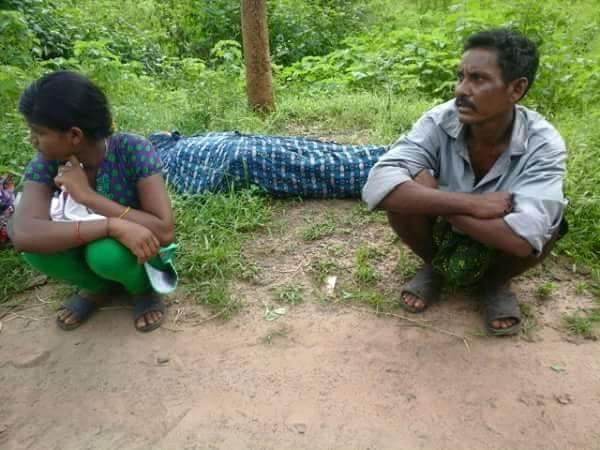 Says Ankush Sharma: “To hell with such kind of development in which human values ate disappearing”.

“I would have slapped the hell out of those hospital people. How can they be so cruel? It breaks my heart to see such happening,” said Pronita Barua.

“If this true, it’s shame on the people who saw him on the road and none of them of them turned for help. Very disgusting. 10 kms hundreds of people should have seen this but no one helped him. What happened to humanity?” reacted another man Abdul Karim.

Says Anil Sheth: “SO VERY SAD…does not speak well for both government and the society”.

Another man Ganesh Mysore comments, “Feeling very bad about the incident. Indian people are not having proper facilities…even if you die no body cares…money speaks every time”.

. A society driven by greed and power where most politicians are corrupt and think of their own self advancement but care two hoots for the country’s advancement. May be this is the reason why we’re still called a third world country. Shame…” observes Rohan Victor Simon.