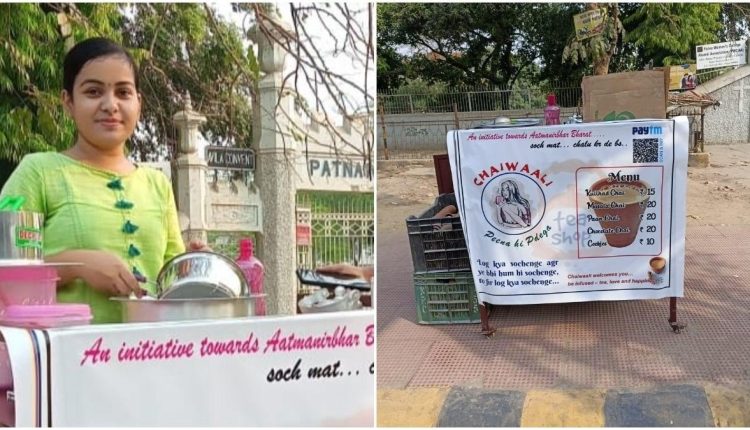 PATNA—A young graduate girl from Bihar has become the talk of the town after she launched a successful startup which has become a big hit.

Twentyfour-year-old Priyanka Gupta, an economics graduate from a prestigious institute in Varanasi, has started making and serving tea in various flavours from her tea stall “Chaiwaali’ (tea seller) which has been drawing a good number of customers. The girl with a stall just outside the Patna Women’s College, a prominent institute of girls located along the Bailey Road, turned to tea business after failing to get a job.

So far, the people in India are aware about the “Chaiwala” that Prime Minister Narendra Modi loves to flaunt himself and his “Chai pe charcha” (discussions over tea) programmes. Now Priyanka has emerged as the new inspiration for the army of unemployed youths struggling to survive.

What has been drawing the attention of the people is some of the attractive punch lines such as “Peena Hi Padega” (You have to drink) and “Soch Mat…Chalu Kar De Bas” (Don’t ponder, start sipping at once) written on her tea stall. She earns around Rs2,000 a day after six hours of business, she says.

She charges Rs10 to Rs20 for a single cup of tea depending on its flavours, such as spicy tea and tea with the flavours of betel, chocolate and cookies.

Priyanka who hails from Purnia, a town in Bihar’s eastern region, said she focused on studies and competitive exams after passing the graduation examination in 2019. “I really worked hard for the next two years to get a government job but failures continued chasing me. So I decided to turn my failures into success but didn’t know what to do next,” Priyanka told the media.

“While I was seriously searching for options to put my life on the track, I came across some videos of Prafull Billore, more popular as “MBA Chai Wala”, and I decided to take a plunge into tea business,” she said, adding she didn’t want to waste her time and energy in condemning the government’s policies and wanted to achieve something herself which becomes an inspiration for the society”.

In a first step in this direction, she landed in Patna on the pretext of preparations for competitive examinations as her father wouldn’t have allowed her to go if she revealed her aim. In Patna she visited several tea stalls and studied their business models. Subsequently, she approached banks for loans but to no avail.

She eventually took a loan of Rs30,000 from a friend and started her business on April 11. “There is no shortcut for success in life. We need to have faith in ourselves to succeed in life,” she says proudly. After her success, Priyanka has told her parents about the business she started.