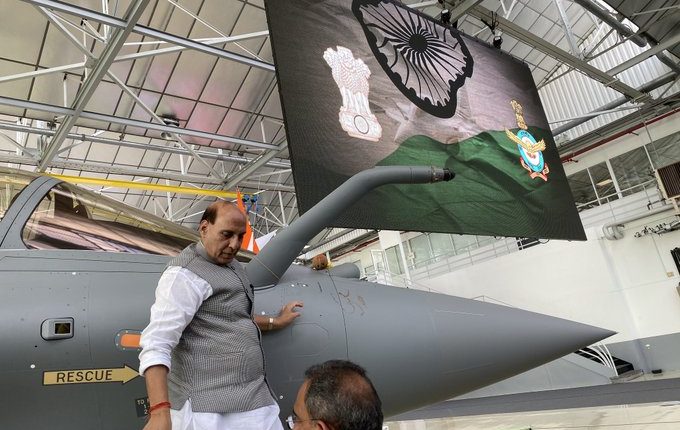 Union defence minister Rajnath Singh received the first of the 36 Rafale fighter aircraft from France on Tuesday well three years after it had signed an agreement with the European nation.

Indian defence minister got the aircraft on behalf of the Indian Air Force on a day when the whole nation was celebrating Dusshera marking the victory of good over evil.

The defence minister offered worship to the fighter aircraft soon after receiving it.

Also Read: We are against arms race on outer space: Pak after India shoots downs satellite

This happened after Singh few to France on three-day visit. “Delighted to be in France. This great nation is India’s important strategic partner and our special relationship goes far beyond the realm of formal ties. My visit to France is aimed at expanding the existing strategic partnership between both the countries,” tweeted Singh.

The defence minister later had a comprehensive discussion over a wide range of issues during his meeting with French president Emmanuel Macron.

India had in September 2016, signed an inter-governmental-agreement with France for the procurement of 36 Rafale fighter aircraft at a cost of Rs 59,000 crore.

Commenting on the development, Singh said it will enhance the capabilities of the Indian Air Force and lay a global blueprint for successful defence cooperation between two responsible states.

According to news agency IBNS, the jets will be fitted with 13-India specifics enhancements including arming with the SCALP ground attack missiles that have a range of over 300 km. They will be flown by IAF pilots in France for at least 1,500 hours as part of the testing and acceptance process before they come to their home base in Ambala.

Reports said all 36 aircraft are expected to arrive in India by September 2022.

Pappu Yadav: The politician who emerged as the messiah of flooded Patna residents

Muslim religious leaders unhappy over closure of mosques during Ramzan

Mother of lynched Bihar cop dies of shock, both cremated together

Villager passes 14 years in jail for no…