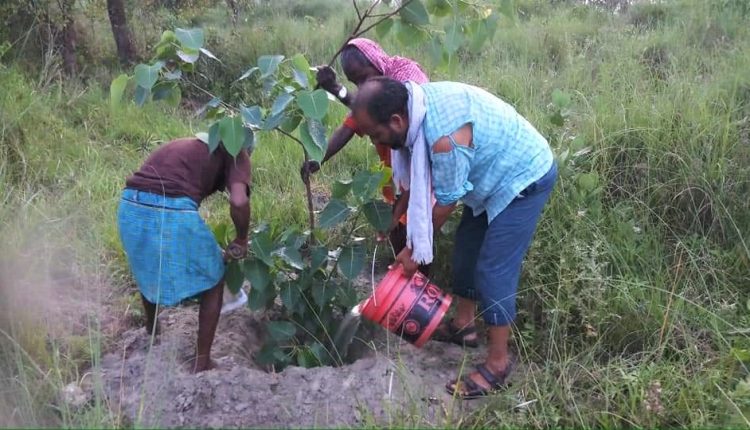 PATNA—A man from Bihar has dedicated his life to environment conservation. Such has been his devotion for greenery that he has decided to lead the life of a bachelor so that he could have plenty of time to serve trees and increase the green cover. So far, he has planted around 400,000 plants, most of which have now become trees, drawing wide applause from the environmentalists and the government.

Meet Gajendra Yadav, 40, a resident of Pipra village in West Champaran district, who has taken upon the task to launch an extensive plantation drive in the region. He also distributes saplings to the villagers free of cost from his nursery that he has prepared at home using his own resources. He asks the villagers and school children to plant trees to save the earth and make it a livable place.

The ace green activist has now become the talk of the town for the way he has sacrificed his life for environment conservation, ignoring repeated appeals from his family members to get married. “The plants are my children… If I get married, my attention will get diverted towards the family life and I won’t be able to devote my time in serving the trees,” Yadav told the media.

The story of Yadav becoming a green activist is very interesting. According to him, he once suffered serious heart problems in the year 2000 as a result of which he remained bed-ridden for two years. “In order to break the monotony, I started listening to programmes on the radio. It was during this occasion that I got sufficient information about how to save the environment from global warming. Extensive plantation was one of the steps suggested by the experts,” he revealed. The information transformed his life as finally when he recovered from heart problems, he devoted his life to planting more and more trees.

Yadav used all the vacant space, such as school campus, river banks, available spaces along the roads, orchards, boundary of farmlands, government lands and along the canals to plant trees. What is further significant, he doesn’t forget to water and protect the saplings he plants. He started this drive in 2003 and now his campaign has reached every one’s lips.

“Initially, the people started distancing themselves from me and called me mad. The mental outlook of my co-villagers changed only after a senior police official noticed my devotion and heaped praises on me for my self-supported plantation drive,” said Yadav who has studied up to Grade 5. He adds: “I feel very happy to see thousands of my plants turning into big trees giving shelter to both humans and birds”.

Yadav’s campaign for the environment doesn’t end just with the plantation. He has also formed a group of youngsters who move around the areas and keep an eye on loitering tree-cutters. The moment the team comes across the people cutting trees, they catch them and register formal complaints with the police and the forest department.

Yadav also celebrates Holi, the festival of colours, with the trees by rubbing colours on their branches and on Raksha Bandhan, a traditional Hindu ritual, he along with the villagers tie knots around the tree trunks, taking a resolve not to harm them in anyway.

Both the chief minister Nitish Kumar and former deputy chief minister Sushil Kumar Modi have honoured him for his rare initiative aimed at environment conservation.