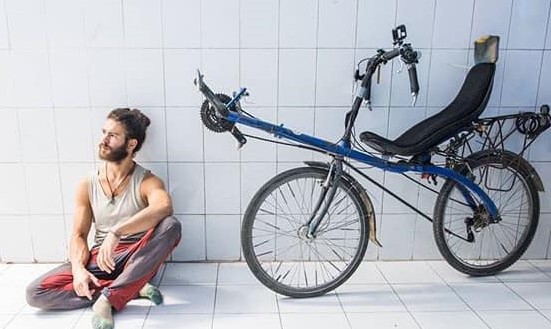 PATNA—Hungarian cyclist Viktor Zicho who was quarantined for two months in a Bihar hospital is learnt to have eaten Biriyani, other chicken dishes and fruits worth around Rs55,000 during his stay there.

Local media has reported the district administration in Saran continued facing tantrums of the Hungarian cyclist while he remained quarantined at Chapra Sadar Hospital. The cyclist had come on tourist visa.

“The man continued demanding variety of food stuffs during his isolation period at the hospital. Sometime he sought Biriyani, sometime he demanded Kheer (a typical Indian dish), and the authorities tried their best to fulfill his wish,” said a report carried in a Hindi daily.

On May 24, he quietly left the quarantine centre to continue his journey for Darjeeling in West Bengal but was caught by the police. on Monday, he finally resumed his mission “Alexander Csoma Expedition” on his cycle and appeared happy after walking for freedom.

“They (locals and civilians) brought me good stuffs to eat and tried to comfort me. I am moved by their gesture. However, I don’t have good term with the district authorities,” Viktor told The Times of India.

He said he was happy that finally he was going to complete his mission that he started from Heroes’ Square at Budapest in Hungry on July 06 last year.

Floods and Covid-19: How Bihar govt is required for immediate action to tackle multiple risks