PATNA: There is a warning signal for the parties claiming to be “secular” as the Muslims in Bihar are seriously looking for other options too and just don’t want to play second fiddle to them.

That is what appears from the huge crowd filling up every inch of the Ruidhasa ground in Kishanganj district on December 29. The crowd had gathered to hear All India Majlis-e-Ittehadul Muslimeen (AIMIM) chief Asaduddin Owaisi who had organized a protest rally against Citizenship Amendment Act (CAA) and proposed National Register for Citizens (NRC).

The AIMIM had only recently made its formal entry to Bihar when it won the Kishanganj assembly seat during October by-election necessitated by the resignation of Congress legislator Dr Jawaid who was elected to Lok Sabha.

The AIMIM candidate won the Kishanganj seat by defeating the BJP candidate while the Congress candidate was relegated to the distant third slot.

The AIMIM win, as such, showed a sudden surge in party’s support base, and given this situation, it was expected there would be good turnouts at the AIMIM rally against CAA/NRC.

But the crowd which attended the rally was even far beyond the expectations of the organizers. In fact, it appeared to be a “deluge of masses” at the Ruidhasa ground on Sunday, who captured every inch of space braving bone-chilling cold and responding every appeal of Owaisi.

“Abhi khel to dekhiye (The drama has only just begun),” commented a senior Muslim journalist.

According to him, Muslims are feeling disenchanted with the “lip service” of the “secular” parties and are looking beyond them.

“Their huge presence at Owaisi rally reflects their desperation,” he explained, suggesting the main opposition RJD to enter into an alliance with the AIMIM. 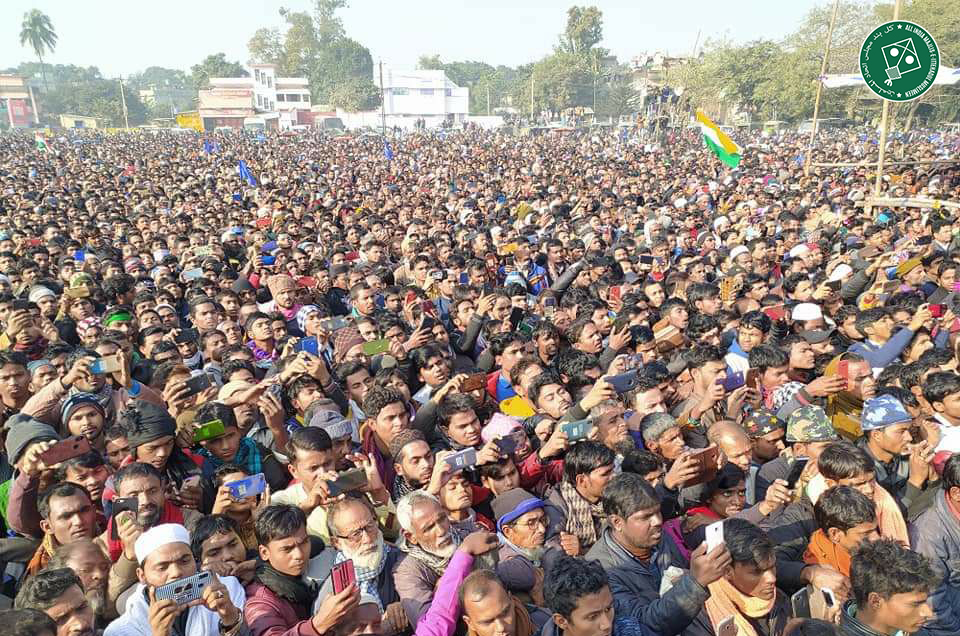 Explaining his points further, he said Nitish Kumar’s JD-U had entered into an alliance with the BJP at the time when it was considered “untouchable”.

“See, how Nitish has been in power for 15 years with the support of same ‘untouchable’ friend. So the secular parties have to think seriously over it,” he suggested.

While addressing the rally Owaisi slammed the BJP government headed by Prime Minister Narendra Modi for trying to create a rift between the Hindus and Muslims.

On the other hand, he suggested Bihar chief minister Nitish Kumar to break alliance with the BJP for the sake of the nation.

“You have made a name for yourself. We all will lend our support to you if you walk out of the NDA,” Owaisi appealed to Nitish Kumar.

Call it a sheer coincidence, the JD-U led by Nitish hardened its position and dropped ample hints about how it won’t spare half of assembly seats for the BJP to contest, on the same day Owaisi held his rally in Kishanganj.