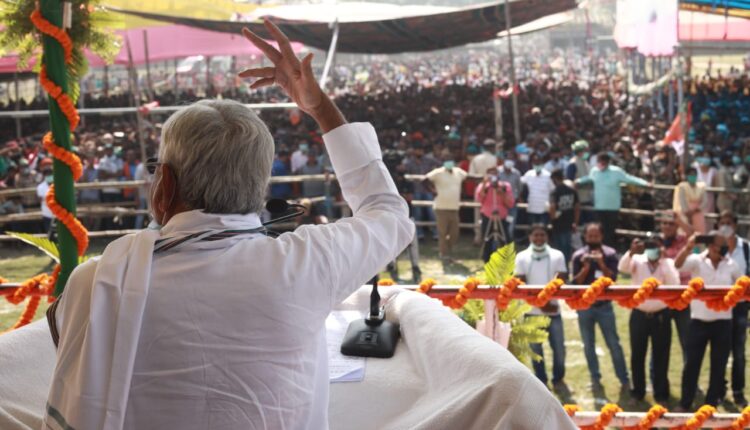 PATNA—The results of the assembly elections in five states where the entire opposition except for the AAP put up a disastrous performance is set to leave a deep impact on Bihar politics.

While this has come as a “triple blow” for chief minister Nitish Kumar, VIP chief Mukesh Sahni finds his political fate hanging in balance for his open challenge to the BJP in UP assembly polls where his party failed to open its account despite contesting so many seats.

Especially, the poll outcome has come as a rude shock for Kumar who was said to be lobbying hard to become the opposition candidate for the upcoming Presidential elections likely to take place in June-July this year.

Although Kumar himself denied he was in the race for the President, several of his party leaders described it as a proud moment for the party with their leader being reckoned as the “Presidential candidate”.

Experts say the Presidential elections would have become really interesting had the combined opposition managed to win at least 50% plus seats in these elections but the whole calculations went wrong.

The Congress was sure of retaining power in Punjab, winning elections in Uttarakhand and improving its performance in Goa and Manipur whereas Samajwadi Party (SP) led by Akhilesh Yadav was hopeful of winning impressive number of seats and forming its government in UP given the massive crowds at his rally.

But with poor performance of the opposition, all hopes of Bihar chief minister to become the opposition candidate for Presidential polls stand shattered now, experts say.

Reports said the entire idea was mooted by poll strategist Prashant Kishor, which later got the backing of Telangana chief minister K Chandrashekhar Rao who later met several opposition leaders over this issue.

The poll result has also come as a huge setback for Kumar to expand his party base beyond Bihar. The JD-U led by Kumar had gone it alone in UP, fielding its candidates on 27 seats after the BJP showed no interests in sealing seat-sharing deal with Bihar-centric political outfit.

The party polled just 0.11 percent votes, according to a report of the Election Commission. The disastrous performance of the JD-U has further trimmed its bargaining capacity.

This comes amid the JD-U already losing much ground in Bihar after getting pushed to the distant third in the 2020 assembly elections, leaving Kumar in power simply at the mercy of the BJP. The JD-U could win only 43 seats in the last polls against 74 bagged by the BJP.

The poll outcome has also come as a serious setback for VIP chief and Bihar Animal husbandry minister Mukesh Sahani whose political ambition too was galloping fast in recent months.

Sahani who comes from the fishermen community had fielded candidates on 53 seats in UP but drew a blank. On most of the seats, his candidates also lost his security deposits.

But what went against him was that he launched scathing attacks on BJP’s two superstar mascots—Prime Minister Narendra Modi and Union Minister Amit Shah, while campaigning for party candidates.

He also lashed at the BJP government in UP which didn’t allow him distribute statues of “Bandit Queen” Phoolan Devi. Eventually, Sahani also campaigned for some JD-U candidates in UP, indicating his level of frustration.

Now with disastrous performance of his party in UP, the BJP leaders are now demanding his instant dismissal from the cabinet. A BJP legislator Harishankar Thakur has demanded his immediate dismissal from Nitish Kumar cabinet saying “Sahani contested elections to ensure defeat of the BJP in UP although he didn’t succeed in his attempt”.

But Sahani doesn’t appear a bit bothered. “I have not joined politics to be in power but to fight for the rights of my fishermen community,” says Saahni who loves to describe himself as the “Son of Mallah”.