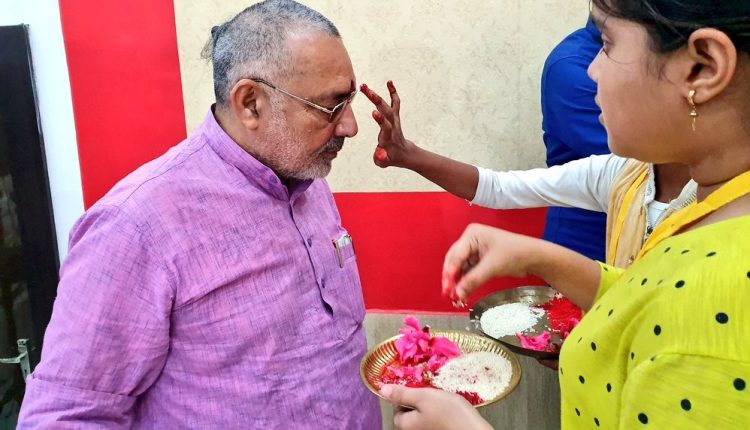 PATNA: Firebrand BJP leader and Union minister Giriraj Singh who is known for shooting rivals from his mouth suddenly finds himself isolated within the NDA in Bihar.

In a fresh embarrassment to the BJP, the Lok Janshkti Party (LJP) which is a key BJP ally in Bihar, has excluded the name of Giriraj Singh out of list of star campaigners for by-elections to Samastipur Lok Sabah seat.

The election to this seat was necessitated after Ram Chandra Paswan who was declared elected from this seat in April-May LS polls died of heart attack in July this year.

The LJP has now fielded his son Prince Paswan from this seat, said to be the stronghold of the party. The LJP has been winning the seat for the past two terms.

In a curious move, however, the LJP has not included the name of the Union minister Giriraj Singh in the list of the party’s star campaigners although chief minister Nitish Kumar figures in the list. This is a being described as an open rebuff to Singh who is known for making controversial statements in the media.

The LJP, however, played down the issue saying the list of star campaigners was prepared keeping in view the demand of the local voters. He, however, admitted that the chief minister Kumar would be campaigning for the party candidate.

Curiously, the JD-U headed by the chief minister Kumar, too has maintained an armed length with Singh and had been attacking the latter for blaming the state government for recent Patna floods.

Giriraj Singh in his statements have refused to accept Patna flooding as “natural disaster” and instead termed it as man-made disaster.

He even slammed the state government for shielding the officials responsible for Patna floods which saw a huge population of the state capital trapped in their flooded homes for close to 10 days.

Now, the BJP too has “disowned” Singh for his controversial remarks and asked the NDA allies not to treat his statements as “official statements” of the party.

“Giriraj Singh is not the official spokesperson of the party and hence his statements should not be taken as the official line of the party,” state BJP president Sanjay Jaiswal said told the newsmen yesterday.