How Darbhanga girl Jyoti Kumari’s achievements are in fact “failures” of our system! 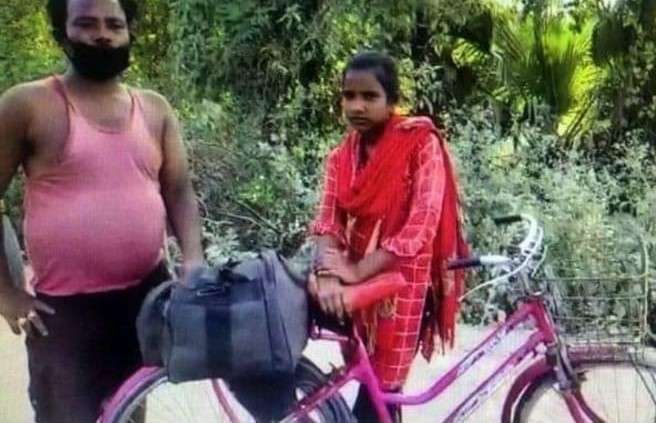 PATNA—Bihar teenager Jyoti Kumari who cycled about 1,200 KM with her father riding pillion to reach her home amid Corona lockdown has become a star overnight for her rare feat.

The girl who till a fortnight back was totally unknown to the outside world now remains either flooded with phone calls or busy managing the crowd of media persons, politicians, rights activists or local villagers rushing to her home to congratulate her.

As her story of daredevilry makes headlines in the media, opportunities come visiting her home more often.

First, she got the cycling trial offer from the Cycling Federation of India (CFI). Then, US President Donald Trump’s daughter Ivanka Trump heaped praises on her, describing her act as “beautiful feat of endurance and love”.

Then, came the news that the Union health ministry is mulling to make the brave Bihar girl the “health ambassador.

Finally, a team of Bihar education department officials rushed her home on Saturday and got her admitted to Class nine, some eight months after her name was removed from the school register since she had not been attending her classes due to troubles on the home front.

“The praises being heaped on her are, in fact, a matter of shame for all of us,” says senior journalist Pushyamitra.

“This could be the personal achievement of the girl but as a whole it is a matter of our collective failures. We failed to stop the teenager on her risky journey. None is debating why this schoolgirl was compelled to carry her father on her cycle?” asks Pushyamitra.

He wonders how none during her 1,200 km-long journey from Gurugram to Darbhanga district of Bihar even bothered to ask her why the little girl was carrying her father more than double of her weight on cycle and why none offered any help while she crossed as many as three States.

Such is the rush of politicians and others to her home that she looks entirely confused now. She doesn’t know what to pursue next.

A day earlier she told The Times of India that she had no interest in the cycling trial offer from (CFI) but now she says she has accepted the offer and go for the trial next month. But, her family is happy with the cycle girl who brought them international recognition.