How a school principal exposes the pathetic academic condition in Bihar 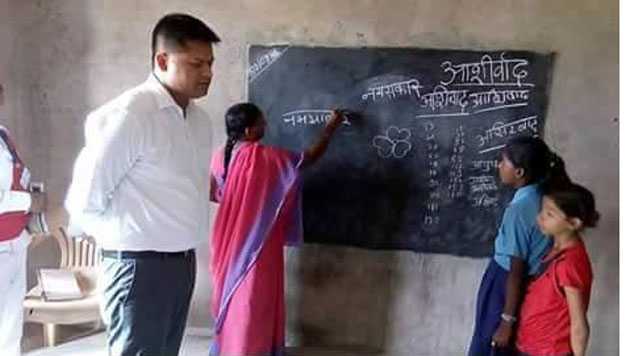 PATNA: This is a sad commentary on the prevailing state of affairs in the education department in Bihar already in the dock for the toppers scandal.

This came as an another embarrassment to the state when the principal of a government primary school failed to write correctly commonly-used Hindi words like “Namaskar” (a traditional Indian greeting or gesture of respect) and “Ashirwad” (blessing).

The matter came to light when the Buxur district magistrate Raman Kumar made a surprise inspection of the school in the weekend to test the standard of education.

The DM was shocked and surprised to find the school principal Ruby Kumari didn’t know how to write correctly the common Hindi words.

She wrote “Nasmkar” instead of “Namaskar” while she couldn’t write the word “Ashirwad” correctly despite several attempts after being asked to write on the blackboard by the DM.

Each time she tried to write “Ashirwad”, she struggled and ended up misspelling it as “Ashiwad”, “Asiwad” or “Aseerwad”.

Taking the matter seriously, the DM has announced to initiate action against the principal. Reports said the DM refused to relent even after she begged pardon. “This blunder is not pardonable”, the DM bluntly told the principal.