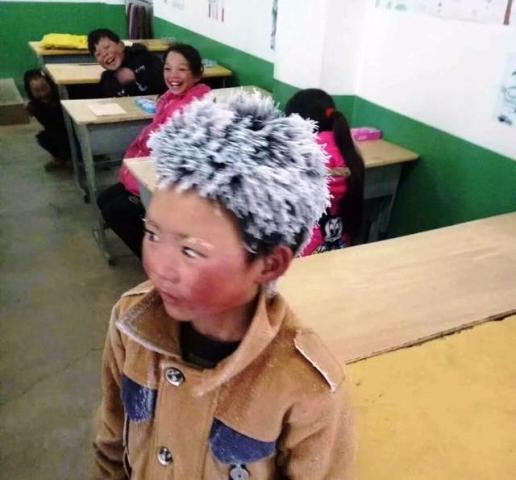 Helps have poured in for poor Chinese boy who rushed to school without any cap on his head, thus leaving his hair and eyelids covered with frost.

Eight-year-old Wang Fuman had rushed to attend a primary school in Ludian County, Yunnan Province, where the temperature that day was around 16 degrees Fahrenheit (-9C).

The photo was taken on January 8 by the boy’s teacher at. In the photo, the boy — not adequately dressed for the bitter cold — has a layer of frost on his head and some on his eyebrows

“According to the teacher, the boy is a third-grade student whose home is located an hour walk away from the school. A typical “left-behind” child, the boy is taken care of by his grandparents in the rural village while his parents have moved to big cities to make money,” a Chinese media, supchina.com reported.

Since the photo was posted online by the school’s principal, it has elicited an avalanche of emotional responses (in Chinese) from internet users. Many of them sent encouraging words to the boy, hoping that his endeavors will pay off in the future. Some said that they would donate money and clothes to the boy’s family, it added.

As per report, the said photograph was shared on Weibo amid China tormented by the brutal cold sweeping the country.