Kanhaiya locked in triangular contest with RJD and BJP candidates 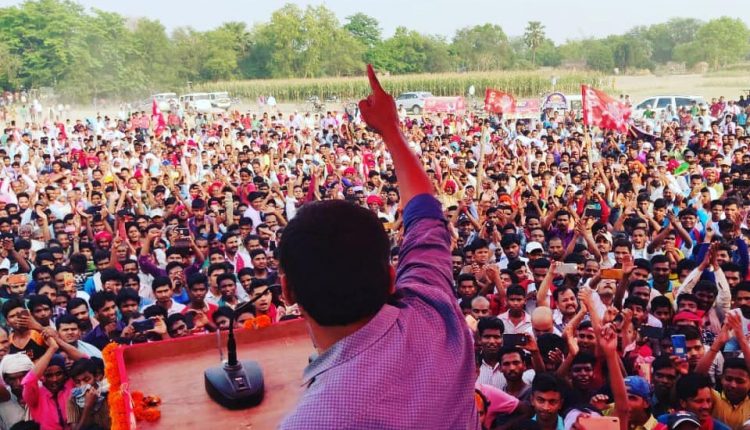 PATNA: Who is winning Begusarai which has emerged as the one of the hot Lok Sabha seats in India’s Bihar state? Is it Communist Party of India (CPI) candidate Kanhaiya Kumar or Bhartiya Janata Party (BJP) leader Giriraj Singh suffering from foot-in-mouth disease? Or, could it be Rashtriya Janata Dal (RJD) nominee Tanveer Hasan?

Although the truth will come out only on April 23 when the counting of votes will take place yet sharp differences have cropped up in the opposition Grand Alliance over the issue of Kanhaiya Kumar with the RJD dropping ample hints that the Left candidate has spoiled the party’s chance by splitting the secular votes.

The RJD believes rather than splitting the votes of his fellow upper caste Bhumihar caste men, Kanhaiya has split the Dalit and Muslim votes and hence must be ready to face the blame on his head if the BJP wins this seat.

“In the triangular contest in Begusarai, there is the maximum apprehension of division in secular votes owing to Kanhaiya in the fray. That means the victory may go in favour of the BJP candidate,” remarked RJD vice-president Shivnand Tiwari in a written post on Tuesday. He also expressed doubts as to whether Kanhaiya was fielded under the strategy to split the secular votes.

Tiwari said although the former Jawaharlal Nehru University Students’ Union president who faced tortures by the ruling regime has emerged as a symbol of protest in the country yet his stature would have gone much higher had he showed patience and stayed away from the contest in a bid to defeat the BJP.

He said there was no reason for the RJD candidate to withdraw from the contest especially when he had given a strong fight to the BJP candidate in the last LS polls polling 369,892 votes and thus losing the elections with barely about 60,000 votes even at the peak of Narendra Modi wave.

“We admit the Grand Alliance should have considered the claim of Kanhaiya Kumar but that doesn’t mean he should have helped ensure victory of the BJP candidate out of sheer frustration of not being fielded from the seat,” wondered Tiwari.

Begusarai which is dominated by upper caste Bhumihar voters faced triangular contest this time and political observers say majority of this particular caste voters went with the BJP candidate although Kanhaiya too comes from this caste. That means Kanhaiya caused split in the vote bank of the RJD, they believe.

The RJD is also unhappy over reports that the Congress party has planned to use services of Kanhaiya in its candidate’s poll campaigns.

“The Congress would like to involve Kanhaiya to spice up its poll campaign in three phases,” Congress’ Bihar in-charge Shaktisinh Gohil has told the local media.

Former Madhya Pradesh chief minister Digvijay Singh who is contesting from Bhopal seat too has expressed his wish to invite Kanhaiya for his campaign. Singh is locked in straight contest with BJP candidate Pragya Singh Thakur, a spiritual guru who faces terror charges.