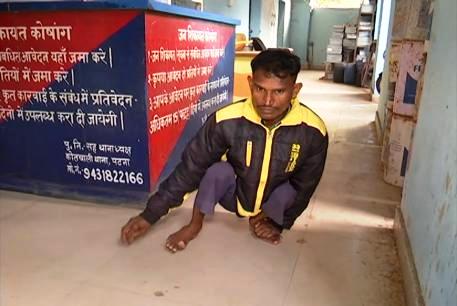 PATNA: An investigation by the police found that a handicapped youth had demanded an extortion of Rs 10 lakh from Bihar sugarcane minister Khurshid Alam on Saturday.

Based on her revelations, the police later arrested Babloo Ram, a handicapped person, from neighbouring Sheikhpura district.

During the investigation, it came to light that the arrested youth got the mobile phone of his girlfriend and called up the minister from this mobile to demand extortion.

Reports said the man also procured the bank account number of the woman to send the same to the minister to deposit the extortion amount but finally landed in jail.

The man had alleged called up the minister on Saturday to demand extortion.

As per reports, the miscreant first sent the minister an SMS but as he didn’t respond, he finally called him up to put the same demand.

The caller also gave him the bank account number where the money was to be deposited and threatened to kill him if he fails to oblige, reports added.

A New Year robbery at the dead night in Patna for country chickens!