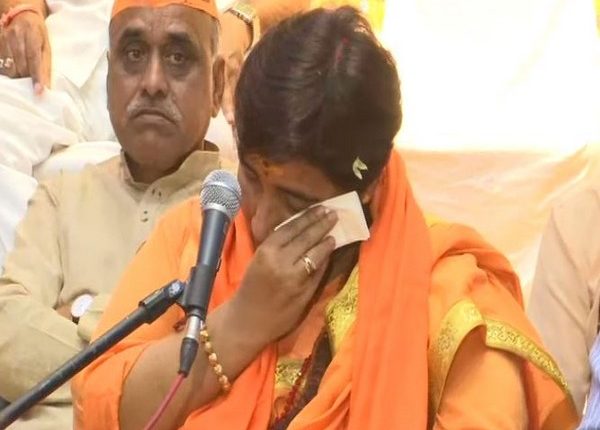 New Delhi:  Sadhvi Pragya Singh Thakur, the 2008 Malegaon blasts accused, on Friday triggered a controversy by saying that  26/11 hero Hemant Karkare was killed as she ‘cursed’ him.

While addressing a press conference, Sadhvi, who is also BJP’s Lok Sabha candidate, said: “I had once told him that you will be finished and he was killed in less than two months by terrorists.”

Hemant passed away while fighting against terrorists on Nov 26, 2008 attack in Mumbai.

He had investigated against Sadhvi in connection with the blasts in Malegaon that year.

He was serving as the chief of Maharashtra’s anti-terror squad during that period, reports said.

Sadhvi joined the BJP this week and was named as a candidate for the party.

She will contest against Congress leader Digivijaya Singh in Bhopal.

Twelve persons, including the Sadhvi and Purohit, were arrested for carrying out a blast at Malegaon, a predominantly Muslim town in north Maharashtra, on September 9, 2008. The blast killed six persons and injured 100.

However, Sadhvi is being tried under the Unlawful Activities Prevention Act (UAPA), reports said. She is currently out on bail.

IPS Association condemned the statement made by the BJP candidate.

“Ashok Chakra awardee late Sri Hemant Karkare, IPS made the supreme sacrifice fighting terrorists. Those of us in uniform condemn the insulting statement made by a candidate and demand that sacrifices of all our martyrs be respected,” the association tweeted.

Mayawati, Mulayam share political dais after a gap of 24 years in UP, triggers storms