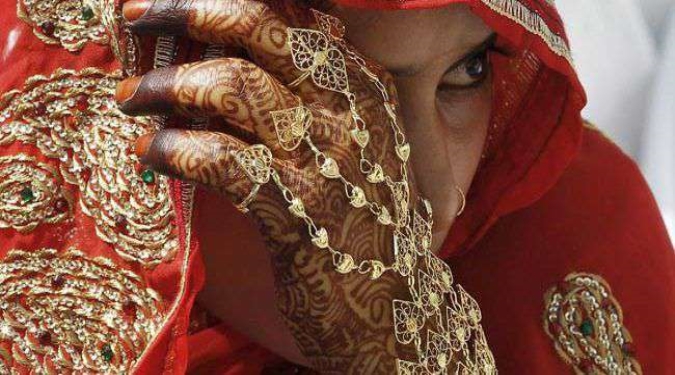 PATNA: A bride in Bihar rushed to the local police station right in her bridal attire and filed a case of dowry and attempt to murder against the groom barely minutes after the wedding had been solemnised and she was leaving for her in-laws’ homes.

The weird incident took place in the Rajendra Nagar locality of Patna, the capital of Bihar, on Saturday, stunning everyone. The police have arrested the groom.

Reports said the girl had come in contact with boy Baibhav Anand, manager with a private airlines company in Delhi, through the social networking site Orkut in 2012. Although Orkut was closed down in 2014, the relations between the two continued through cell phones and other means.

It was during the course of chatting that both fell in love and decided to marry. When the family members of both sides came to know about their love affairs, they fixed their marriages, and finally on Friday night, their marriage was solemnised at a local marriage hall in the presence of guests. Everything ended on a happy note.

The very next day on Saturday, the family members even saw off the bride with the groom. Witnesses said hardly had the car carrying the couple covered a little about 150 meters when the bride jumped out of the vehicle and started running towards the marriage hall, shouting “Save me, save me”.

The scene of a bride in her bridal attire and running on the road seeking helps drew a large number of people. Even before the people could understand, she accompanied with her family members rushed to the local Kadamkuan police station and registered a case against her husband.

In her complaint petition, she charged the groom with passing casteist remarks towards her, seeking dowry and attempting to kill her inside the car. She refused to relent despite repeated requests. Eventually, the groom was arrested and sent to jail.

“We have arrested the groom and sent him to jail on the basis of the complaint registered by the bride,” a local police official Ajay Kumar told the media on Sunday. The police are investigating the case but said they have not come across such incident in the past.