Grand welcome, celebrations after girl is born in this Bihar family 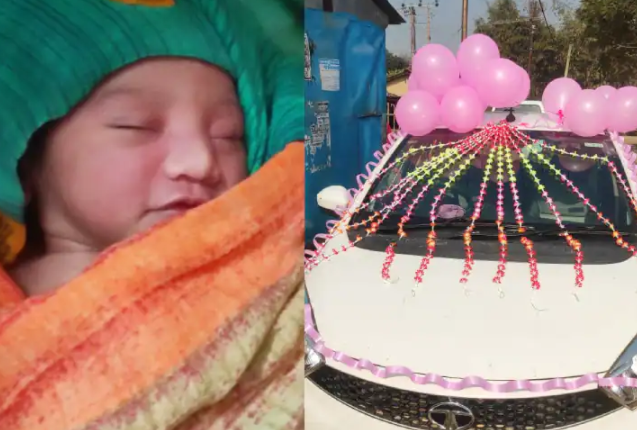 PATNA—Amid the unpleasant stories of female infanticides and gender discrimination routinely surfacing in the media, this is indeed heartwarming news.

A man got so much overjoyed after hearing the news of the birth of baby girl that he tastefully decorated his car and rushed to the hospital to receive his darling daughter and bring back home. He also distributed packets of sweets in the entire village to celebrate the occasion.

Sheshnath Kumar, a resident of Chaparia village from Mainatand block in West Champaran district, admitted his wife to a local primary health centre last week after his wife’s labour pain began. Hardly had he reached his home for some urgent works when he was informed over phone that he was blessed with “Laxmi”.

The news left Sheshnath on cloud nine. Subsequently, he hired a car from the market, adequately decorated it with balloons and festoons and rushed to the hospital to receive his daughter and bring back home.

Finally when the mother and the daughter reached the home, they were welcomed with garlands around their neck and ‘aarti’ by the family members as a mark of respect before they were allowed to enter inside the house.

Not only that the family also decorated their home and distributed sweets in the entire village as well as among the hospital staffs to celebrate birth of girl child. Significantly, she is the second baby girl in the family but they have no son yet their joy can be seen to be believed.

“We all are very happy since Laxmi has visited our home for the second time. We can’t explain our happiness in words,” said Sheshnath. Stating that there is no difference between son and daughter, he said “only our thinking differentiates between them”. The daughters, he asserted, are not behind boys today.

In another interesting story, a couple from Bihar has gifted a plot of land to their daughter Ashtha Bhardwaj on her 10th birthday. She is the first girl in the family in many decades.

According to him, he began the process for registering an acre of land on the Moon in the name of their daughter 18 months ago and eventually succeeded in their efforts in January this year.