Govt orders probe as patients, dogs sleep side by side in top Bihar hospital 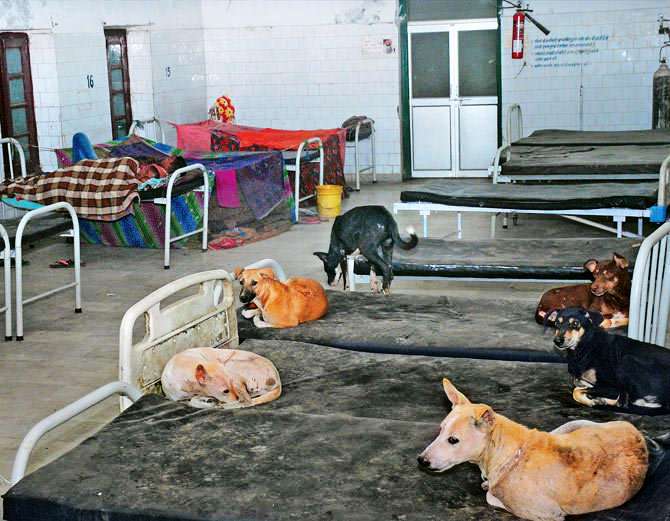 PATNA: The state government in Bihar has ordered an investigation after street dogs were found sleeping on beds alongside patients to fight the deadly cold at a leading government hospital.

The investigation followed shortly after a video of street dogs occupying seats on the beds meant for patients at the Sadar (main) hospital in Muzaffarpur, a northern Bihar town, and spending the nights in the highly protective environment went viral in the media.

“It’s a very serious matter. We have sought a report from the local civil surgeon. Action will be taken once we get the report,” Bihar health minister Mangal Pandey who comes from the ruling Bhartiya Janata Party (BJP) told the media on Wednesday.

The photographs which have gone viral show the dogs seating or relaxing on the beds alongside several patients admitted to the surgical ward of the hospital. Reports said of the total 40 beds in the surgery ward, dogs have captured at least 10 since the city began experiencing winter spell.

The patients having undergone surgeries or suffering from burn injuries are admitted to this ward but they refrain from driving out dogs out of fear of being attacked by them and borrowing yet another trouble. Reports say on an average 60 patients of dog bites come to this hospital every day for treatment indicating the terror of street dogs.

“We chased away dogs sometimes but ultimately they attacked us instead. We then stopped doing that apprehending they could attack our patients and land in another trouble,” a patient’s attendant told the local media.

Witnesses said the dogs occupy beds shortly after the night falls and the hospital staffs go missing. They said no hospital staffs are seen post midnight to stop the entry of dogs and chase them away. “We complained to the hospital authorities but nothing worked,” a witness alleged.

Taking the matter seriously, the local administration has now ordered for fitting iron grills in the ward. “I have ordered the building construction department to fit iron grills in the surgical ward to prevent street dogs coming to the hospital and grab patients’ beds,” local Muzaffarpur district magistrate Dharmendra Singh said.

The district magistrate said the medical superintendent, deputy superintendent and hospital manager were responsible for smooth functioning of the hospital.

“But it appears that these officials were not carrying out regular monitoring of the hospital. I have also inquired about dogs sleeping in wards and have directed that ward attendant and security personnel must always remain at the ward,” said Singh.