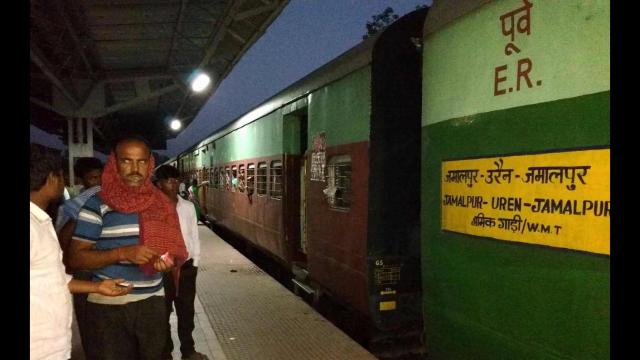 PATNA: A train which had been constantly running for the past 155 years and for which no fares were charged from the passengers has finally slipped into history with the railways finally discontinuing it yesterday, citing financial losses. Everyone went emotional when the train had its last run on Tuesday.

The train nicknamed Shramik Express meant exclusively for the railway employees working with the had been playing on 40-km long route between Jamalpur and Dhanauri stations in Munger district.

Railway authorities said the train was started in 1862 while India was under the British rule to ferry labourers working in neighbouring railway engine factory at Jamalpur in Munger district.

Although it was primarily meant for transporting railway workers, the local villagers too had been extensively using this facility as the railways charged no fares from the passengers travelling by this train with a total of eight bogies.

The people turned emotional when this train was allowed rest for ever yesterday. The scene was really poignant on the last journey of this train on Tuesday. One of the passengers Mahesh Mandal could not restrain himself and touched the body of the train before leaving the site. Soon, he was seen wiping his moist eyes from handkerchief.

“It was not just a train; it had become a part of our culture, our daily routine. I never saw it running late,” remarked Kartik Kumar, a train passenger. The train had been running twice daily on this particular route and plied on all days of the week except Sunday.

Villagers said elsewhere in India trains may be running behind schedule but the very train was quite much punctual. “You can understand its punctuality from the fact that we had been setting times in our watch by listening to the horns of this train,” said a villager.

Authorities said the train had become a white elephant and was incurring huge financial losses to the railways. “The average per day expenses on running the train was around Rs 10lakh (Rs One million) against the of Rs One lakh (Rs 100,000) only,” said a railway official. According to him, more than the railway employees, the local villagers had been using the train.

Railways authorities have in the meantime promised to provide other alternative arrangements to help the railway employees now that the train has been discontinued. “We are looking into the inconveniences caused by its discontinuation. Alternate arrangements will be made soon,” divisional railway manager, Malda, Mohit Kumar Sinha told reporters today.