SHE TELLS JOURNEY OF HILLMAN DASHRATH MANJHI, EMPOWERED WOMEN AND ‘BETI BACHAO’ AS DOES SHE DEPICT TRADITIONAL RAMAYANA AND MAHAVHARATA WITH EASE

PATNA: One does remember Nawazuddin Siddiqui-starrer biopic of Dasrath Manjhi, “Manjhi: The Mountain Man”. But, just imagine a Madhubani painter telling journey of unputdownable Dasrath Manjhi and his wife Phagunia through shades of brush!

This is what Patna-based Madhubani fine arts painter Chitra Singh tells the entire journey of the hillman who cut through Gehlore hills in 22 years to shorten distance between Atri and Wazirganj in southern Bihar’s Gaya district from 50 to 15 km.

And, she does it all in one frame. The last frame of the painting on canvas shows state CM asking him to sit in his chair as mark of honour for the man, who chiselled his way to fame but still lived in penury and died of cancer. His legacy and symbolism live on.

When Chitra Singh took to Madhubani painting and learnt its basics of Darbhanga painter Rekha Das, she would say that there are about one lakh Madhubani painters and she does not want to become the 100001th painter.

She chose Madhubani fine arts for artistic liberty and incorporated modern subjects, the current generation can relate to. Dasrath Manjhi was one just frame.

Her painting “Journalism of Courage”, the theme of The Indian Express, is yet another successful portrayal of contemporary theme. Here again, she told journey of The Indian Express in four frames of the newspaper’s stand against Emergency, exposure of Bhagalpur blinding, Panama Papers expose and an intrepid reporter’s stay with Maoists for 23 days.

She also painted “Beti Bachao” theme that shows an interesting Bhagalpur tradition of parents sowing two saplings to mark and celebrate birth of a daughter and her journey to success. 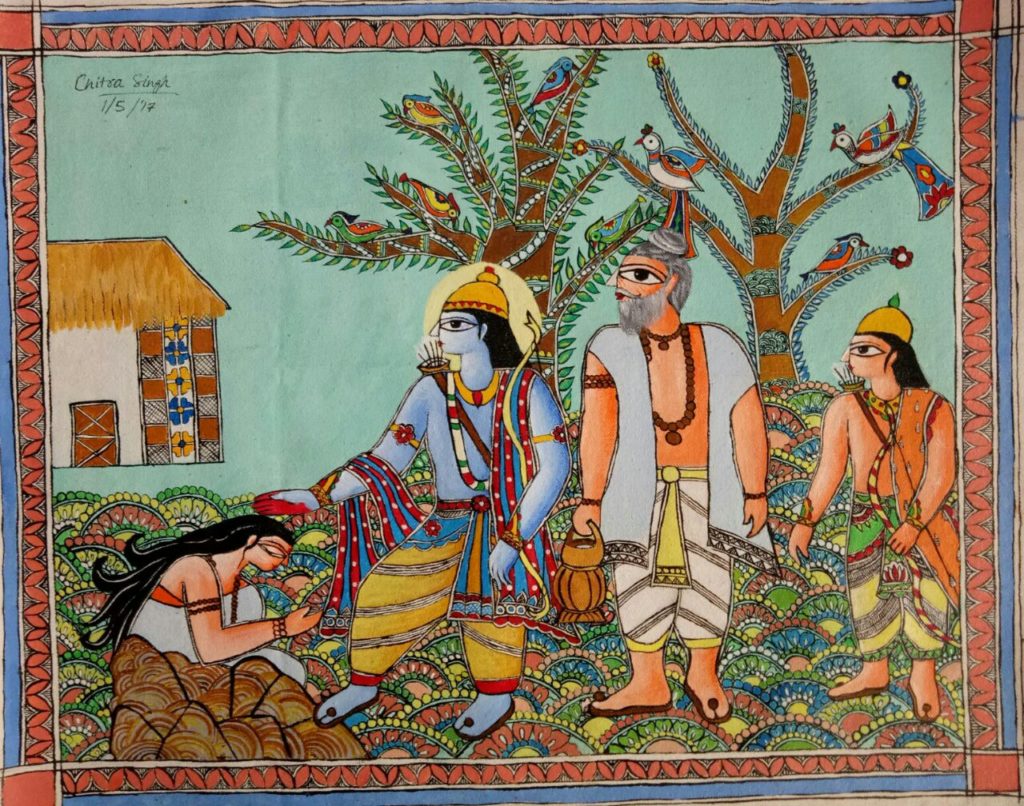 Her another famed contemporary work, “Empowered Women”, picked by Common Service Centre as part of Digital India Campaign, was presented to Union minister Ravishanker Prasad last year. This frame tells how women mukhiyas had slowly started asserting themselves and how girls riding their way to school on bicycles tell a journey of social transformation besides empowerment.

Chitra, though originally from Gulni-Kushaha village of Banka, was born and brought up in Patna with her mother Hemlata Singh, who played role of both parents after death of her father when she was all of 12 years.

Chitra and her sister Neeta, who wanted to become doctors, had natural instincts for paintings. 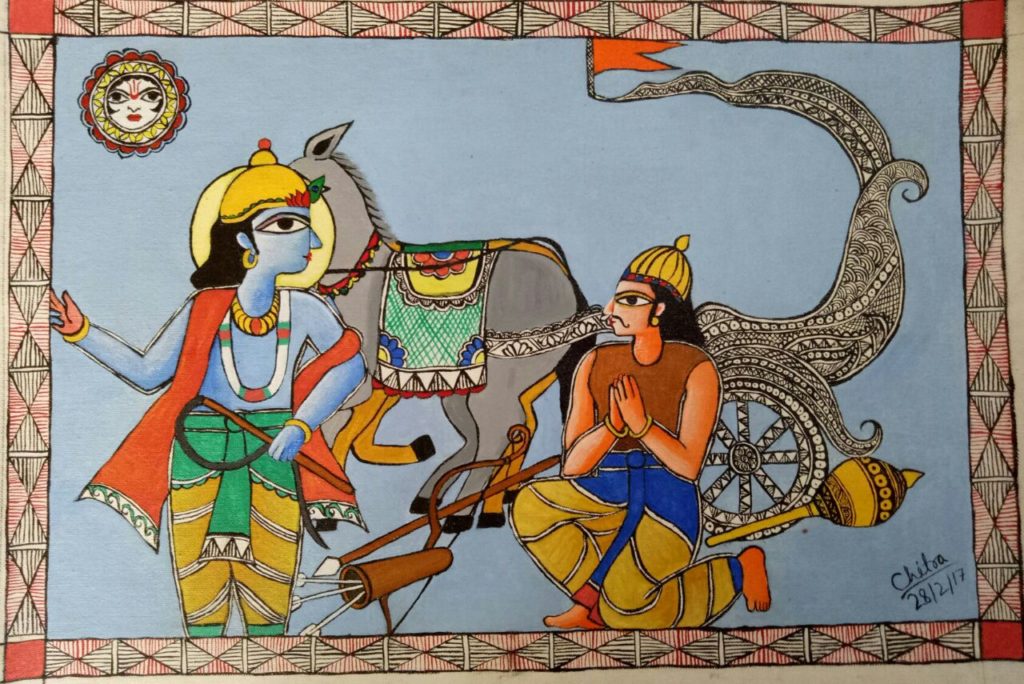 While her younger sister Neeta has made a name at national level as a contemporary artist  in acrylic  medium, Chitra has been excelling in Madhubani fine arts. She has about 100 paintings to her credit through her journey of seven years as a painter.

Her works were on display during an Indo-Nepal show at Patna in 2015. She designed stage of Nagaland Bhojpuri Samaj in 2016.

Her biggest moment as an artist came in July 2016 when her works were chosen as part of Digital India campaign and she got an honour of representing Madhubani painting from Bihar at Centre’s vle bazaar site, a national forum to promote online sale of folk artists. 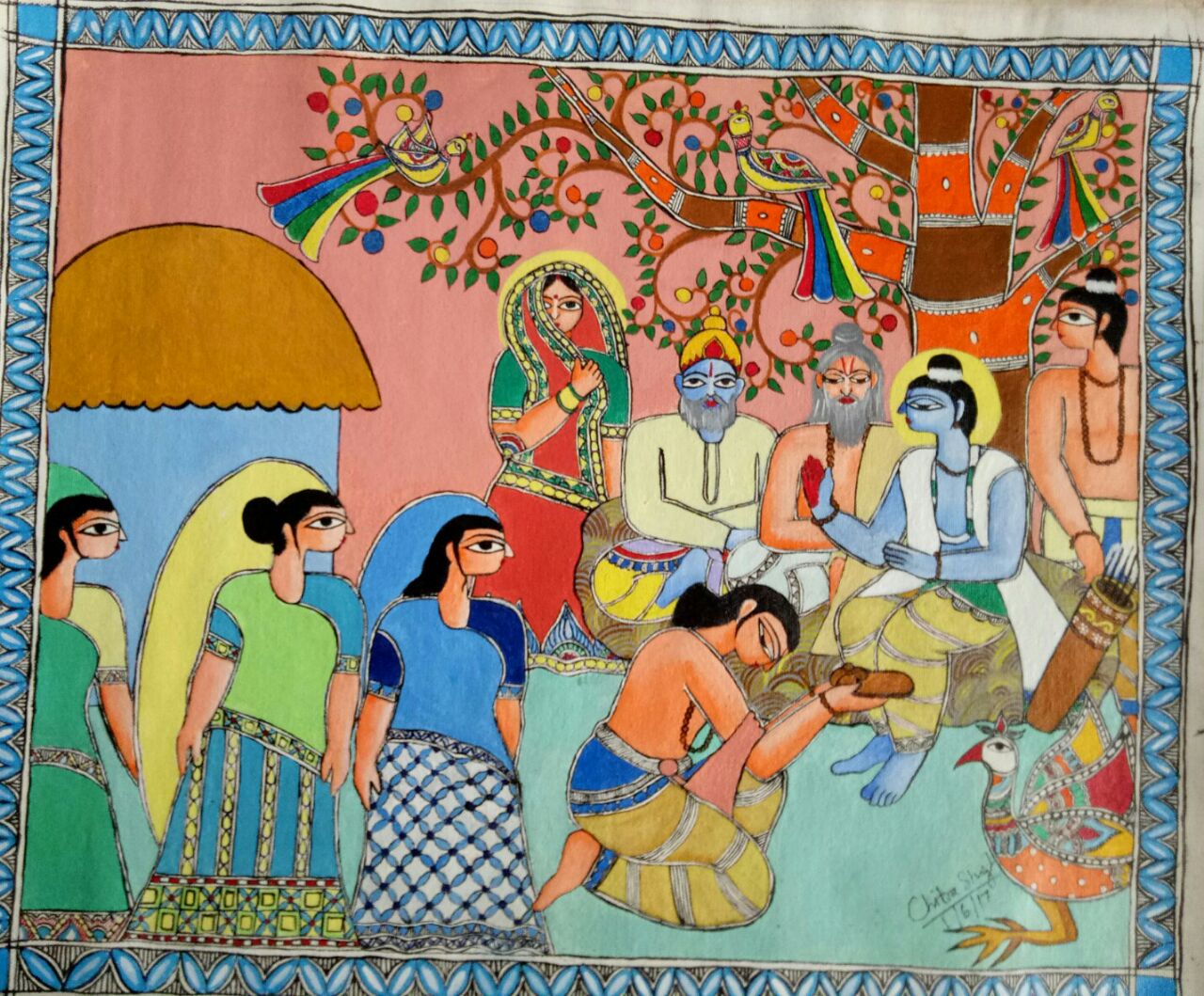 Chitra has been currently working on series of paintings on “devotion” theme.

“When one thinks of devotion, it has to be Bharat’s love for Rama, Hanuman’s devotion for Rama and of course, Kevat and Ahalya would come in one’s mind”, says Chitra, who has been planning her solo painting exhibition at Patna in September-October.

She wants Madhubani fine arts to go beyond traditional theme and incorporate modern themes. “Maybe a mall as a subject someday”, says Chitra with chuckle.