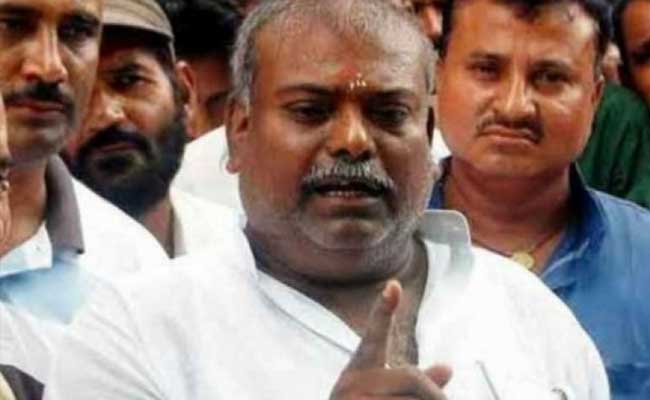 Although the present storyline is entirely different from that of 1978 Indian action film directed by Chandra Barot yet Bihar’s fugitive Rashtriya Janata Dal (RJD) legislator Raj Bhallabh Yadav accused of raping a minor girl gives impression of this typical Bollywood character in some aspects.

For the past one month since a case of rape was registered with the police, the legislator has been out of police’s reach despite intensive raids conducted by the several police teams from neighbouring districts to nab him.

Just every attempt of the police to catch him has ended in smoke. Have a look at this: first the police relied on information given by district RJD president that Raj Ballabh will surrender soon in the court, then they nabbed his son Akhikesh Yadav and a key link in the case Sulekha Devi to get some clues about lawmaker’s whereabouts but got nothing in the end.

Subsequently, the police announced to cancel all his arms licenses as well as mining licence if any, pasted attachment notices on his house and confiscated his property as well but these tricks too failed to yield any result. Even chief minister Nitish Kumar’s order to arrest him soon has the police miserably failing to get near him.

Add to these, the RJD has already suspended the rape-accused lawmaker from the party and appealed to him to surrender before the law but to no avail.  Right now, the police have no clues if the lawmaker is in the Bihar or sneaked outside the state, say informed sources.

Police went after Raj Ballabh when the victim after mustering courage filed a rape case against him last month, three days after the incident. As per reports, initially the police refused to entertain her case finding a mighty ruling party politician involved in the incident. They went after the lawmaker only after the senior police officials took cognizance of the case and ordered arrest of the accused after gathering some concrete evidence of his involvement in the rape.

Reports said the victim smelt rat when the woman reached the house with her and subsequently tried to escape but was caught by the guards in security of the accused and locked in a room.

Soon after the incident, she reported the matter to her parents who registered a case with the police. It was during the case of investigation that the police showed her some photographs of the suspects and she identified the accused.  Reports said the victim yelled with bewilderment after seeing the photograph of the lawmaker.

On International Women’s Day, RJD MP asks fair sex to beat up husbands with brooms if they don’t quit drinking