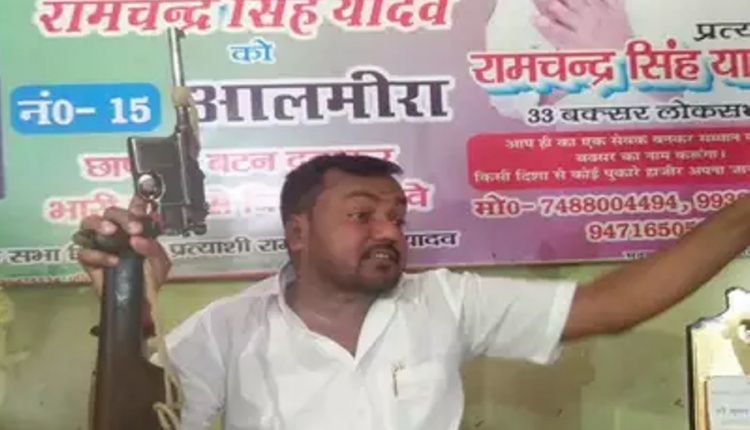 PATNA: A former Bihar lawmaker and Independent candidate Ram Chandra Yadav on Wednesday formally took up arms in his hand and vowed to shoot, a day after Rashtriya Lok Samata Party (RLSP) chief Upendra Kushwaha warned of bloodshed in case of “loot” of people’s votes.

Yadav who contested the Buxur Lok Sabha seat as an independent candidate displayed and toyed with pistol in his hands at a Press conference he held in Bhabua town on Wednesday.

“I have taken up arms and leaders should order what I have to do, where to fight and how to go with the plan,” Ram Chandra Yadav told the media on Wednesday. He claimed he had thousands of supporters ready to fight the war.

Yadav offered to fight for the Grand Alliance barely a day after Kushwaha had threatened in Bihar violent protests in case of attempts to “rob” the results.

“Earlier we had heard about booth loot but this time attempts are being made to loot the results through swapping of EVMs. If that happened, they will be compelled to take up arms in hand. The administration will be solely responsible if there is any bloodshed in such a situation,” RLSP chief Upendra Kushwaha warned at a Press conference in Patna on Tuesday.

He summarily rejected the exit polls saying the ruling regime was using them as a cover to manipulate the people’s verdict but they won’t allow it to happen at any cost.

All exits polls have predicted absolute majority for the BJP-led NDA while in case of Bihar, they have predicted NDA’s victory on 30 to 40 Ls seats, giving a few to none to the Opposition.

“People take up arms out of desperation and so people should take care that the situation doesn’t reach at that level,” the Grand Alliance leaders warned.

Blood will spill on Bihar streets if any attempts to rob people’s verdict, warns Kushwaha