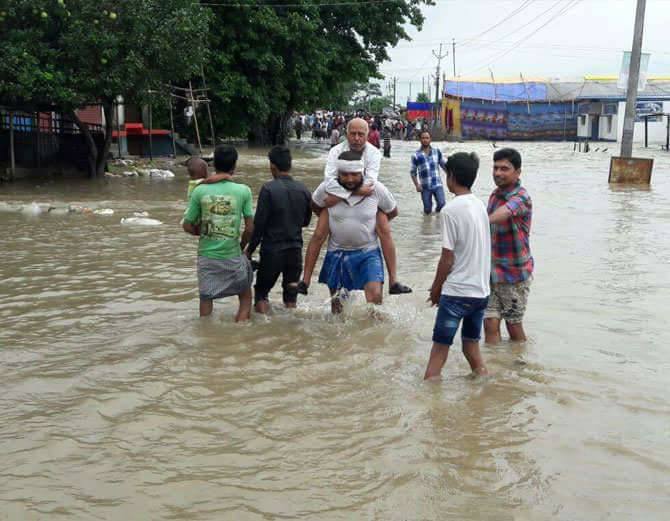 PATNA: The death toll climbed to 90 as the floodwaters entered new areas in Bihar today, leaving the state administration on its toes.

According to a report in Hindi daily Dainik Jagran, floods have killed 90 people so far although the officials have confirmed only 51 deaths.

The maximum casualties have been reported from Araria. The other districts which reported flood deaths include West Chmaparan, Purnia, Kishanganj, Supaul, Sitamarhi, Katihar, Saharsa and Madhepura.

As per an official report, over 65.37 lakh population (6.53 million) population settled in 889 panchayats across 13 districts are currently badly affected by floods.

Authorities claim to have evacuated 182,420 people so far. The government has also opened 254 relief camps where 45,120 people are currently taking shelter.

Keeping in view the severity of the situation, four columns of Indian army, 22 teams of NDRF and 15 teams of SDRF have been deployed in the flood-affected districts to launch relief and rescue operation.

Meanwhile, the state government today cancelled leaves of its employees, officials and doctors in the flood-hit district as the flood situation worsened further.

The chief minister Nitish Kumar said the flood situation, particularly in the Seemanchal (Bihar’s eastern border) region is very grim but said the government has launched relief works on war-footing.

“Araia and Kishanganj are the worst affected districts where floodwaters have entered into any villages about which none can expect,” Kumar said on Monday after conducting aerial review of the region.

He said the flood situation had been caused by heavy rains. “This is the result of nature’s fury but we will do whatever the maximum we can,” he said.

According o a report from the Central Flood Control Room, many rivers such as Kamala Balan, Mahananda, Parmar and Bagmati have broken its mud embankments at many places. This has further worsened the flood situation in the state.