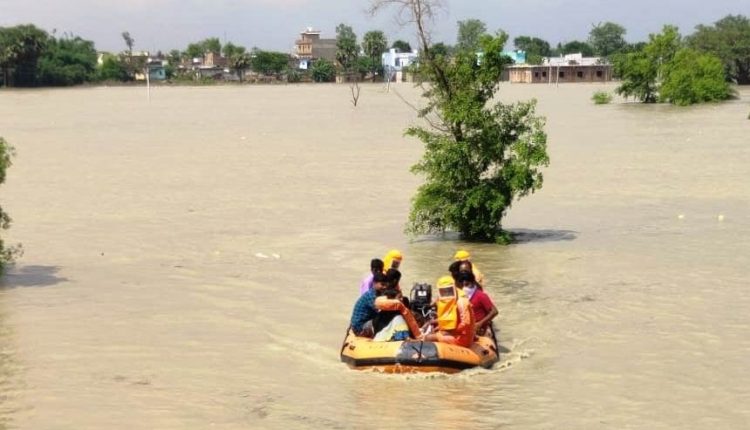 PATNA—Farmers in Bihar went ecstatic when the Indian Meteorological Department (IMD) predicted about “normal to above normal” rainfall in most part of the country this year. They, however, have suffered the first major setback when the floodwaters entered their villages in June itself, prompting them to flee for safer places so early.

Strange though it may sound but several villages of Gopalganj, East Champaran and West Champaran have been left flooded following heavy rainfall in the state and also in catchment areas of rivers in Nepal, such as Gandak, Lalbakeya and Sikranha.

Officials said more than 5,000 people have been evacuated in these three districts while many of them have been living under their flooded homes.

Reports said the water resources department officials have been literally caught unawares by floods which hit the region too early. The repair works of quite many embankments are yet to be completed. This has caused panic among the people living along the embankments in the flood-prone district.

A good thing, however, is that the water resources department has come into action quickly. Water resources minister Sanjay Jha said the department teams are carrying out patrolling even at night to save the villages from flood disasters.

“This year the department is soliciting partnership of local communities for efficient monitoring of embankments. While patrolling they look for any threat to embankments and take corrective steps,” the minister said.

A Central Water Commission report said that quite many rivers in Bihar, such as Gandak and Kamla Balan are currently flowing close to the danger mark at several places. Especially, Gandak has been very much in spate making villagers pass sleepless nights.

TV footages showed children sitting atop plastic-covered bullock carts while their parents busy in somehow cooking meals standing in knee-deep water which has entered their homes.

“This has become a part of our life. We face this situation every year although the trouble started too early this year,” said a local villager.

In a related development, National Disaster Response Force teams saved 13 villagers from getting drowned after the boat they were riding upturned while they were crossing the river in Gopalganj district.

Panicky villagers climbed the trees and started crying for help when the disaster team rushed to the spot and saved them. Floods have been causing massive destruction every year.

Five tourists die close to their home on…