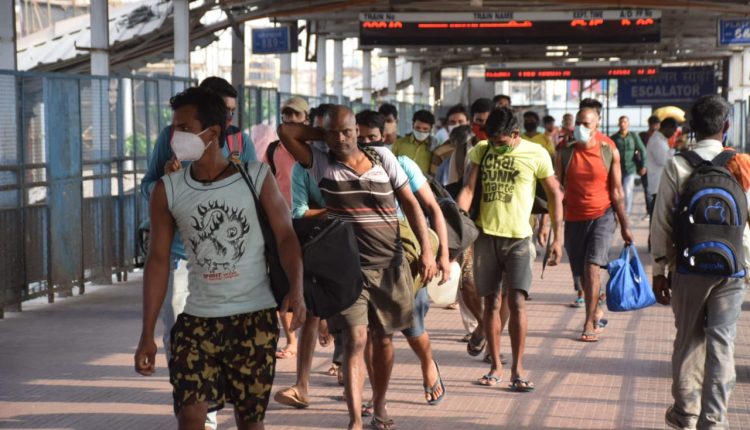 PATNA—Anxious migrant workers have begun returning to their homes in Bihar, fearing fresh Covid restrictions in view of sudden upsurge in coronavirus cases across India which experts describe as the arrival of the third wave.

In the past few days, thousands of migrant workers have returned to their homes in Bihar, riding buses and by trains. Majority of the migrants are returning from Maharashtra and Delhi which have reported maximum number of COVID-19 cases, Punjab, Rajasthan, West Bengal, Orissa and Uttar Pradesh.

Carrying luggage on their heads, hands and shoulders with family members in tow, the hapless migrant workers anticipate bleak future ahead with several Indian states slowly imposing Covid restrictions to check spread of the coronavirus. Quite many migrant workers had only recently left their homes to find jobs after the paddy harvesting season was over in Bihar and hoped to stay in their new locations for long but the growing infections have dashed their hope.

“Everyone is talking about clamping of fresh lockdown following alarming rise in coronavirus cases. So we returned homes before the government enforced it formally. Now, we will stay with my family at home for some time until the situation gets normal,” said Yughal Kishore Prasad who returned to his home with his family members on Wednesday. A resident of Nalada district, Prasad works in a slipper factory in Haryana while his other family members work as nigh guards.

Another migrant worker Kundan Kumart said the situation is getting serious in Maharashtra and hence he decided to return home before he gets trapped in his rented house. “I have taken both the doses of the vaccine but the COVID-19 cases were going up very fast there. So I returned to my home,” said Kundan who works in a private factory in India’s financial capital. Kundan who hails from Gopalganj district said 400-500 workers are fleeing their homes every day.

“Everyone wants to return home and be in the company of family. Only those persons are stuck up whose tickets have not been confirmed,” said another migrant worker Rajesh Yadav who works in a cotton factory in Surat, Gujarat. Similarly, Amod Patel has returned homes since the Delhi state government has banned open sale of food stuff due to COVID-19 infections. Patel runs a food stall in India’s national capital.

Quite many migrant workers are returning homes as they are unable to forget the horrible 2020 summer experience when many of them had to return to their homes, walking hundreds of kilometers on foot in the sweltering heat as the Indian government not only suspended train and air services but also the bus services.

Although there is no authentic data about the Bihar migrants settled across India, the Bihar government estimates their number to be around three millions on the basis of money credited to their account during the first lockdown. Unofficial reports, though, put their number much more.

According to a report, there are around 25 districts in Bihar out of its total 38, where migrants have impressive numbers—ranging from 40,000 to over 100,000. Of them, two districts, such as Madhubani and East Champaran have more than 100,000 migrant workers while in four districts, their population is more than 80,000.

According to a latest study conducted by a group of Non-Profit Organisations, the Mahatma Gandhi National Rural Employment Guarantee Act (MGNREGA) has failed to serve purposes to the returnee migrants so far. The study was conducted last month in twin states of Bihar and Uttar Pradesh.

As per the study, although the government has increased MGNREGA allocation, this is not reaching those most in need. The major factors coming on the way, according to the study, are corruption, delay in non-payment of remuneration, low job allocation, and loans that the community has taken from non-institutional sources. The study said despite the government’s good intention and budgetary allocations, migrants are getting into debt bondage and children are at high risk of child labour.

The study said only 20-50% job card holders have been able to access MGNREGA work which is leading to distress migration. “In Bihar, in most locations only 50% of families have job cards and those who don’t have them, are not interested in getting them issued because of their previous experience of non-payment/delay in payment. In UP, even in areas where job card holders are significantly high, job allocation is very low. In both states, communities are dependent on verbal requests for job demand which cause a lacuna for corruption,” the study said.

The study added that the migrants are at high risk of debt bondage and trafficking because in all locations, significant number of families has taken loans from non-institutional credit sources. It is foreseen that if they are unable to pay loans, then they would fall into debt bondage and their children would be forced into child labour.

“The payment rates under MNREGA are substantially less than the market rates. Secondly, contrary to the market, payments are not prompt and faultless,” said the study conducted in Sitamarhi district by Adithi, an NGO.

According to the research, due to poor financial conditions, almost all families have taken loans from Self-Help Groups or local money lenders, relatives or others often on high interest rate and this has put additional burden on them due to no earnings.

“The reasons why the job under the MGNREGA scheme has failed to attract job seekers are low wages as compared to market rates and also delayed/irregular payment to the beneficiaries. The per day wage under the MGNREGA is only Rs 194 whereas labourers in the same locations get daily wage jobs with payments up to Rs 250 per day,” said Suresh Kumar, Executive Director of Centre DIRECT.