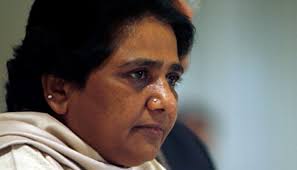 Expelled BJP leader Dayashankar Singh has kicked up another controversy by allegedly comparing BSP chief Miss Mayawati to a “dog”. He also accused her of “running after money”.

He made these allegations at Agra in Uttar Pradesh on Sunday.

“She is a greedy woman and is like a dog that chases speeding motorcycle in lanes, but steps back when the vehicle stops,” Singh was quoted as saying in The Times of India today.

Earlier in July, Singh had created a nation-wide furore when he labeled the BSP chief “worse than a prostitute”, leading to severe condemnations from various quarters and issuance of non-bailable arrest warrant against him by a UP court.

After abscond for a fortnight, he was finally arrested from Buxur district of Bihar where he was hiding in the house of a close relative.

Singh had drawn criticism from leaders across parties when he likened the BSP chief to a “prostitute” who, he alleged, was selling party tickets just ahead of the upcoming state elections after taking money. The remarks drew strong protests by the BSP and also figured in the Parliament.

With the crucial UP elections round the corner, the BJP was only too quick to apologize and also expelled the leader from the party for his misconduct.

From China, with love!