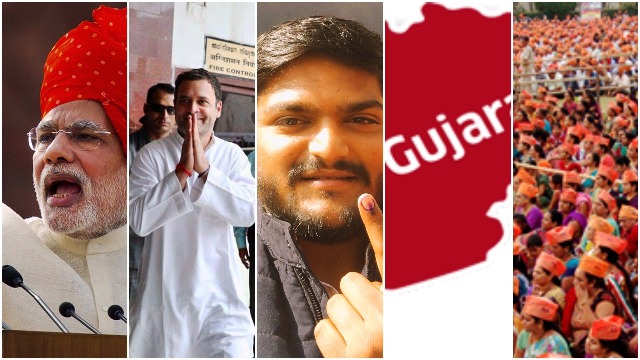 New Delhi: Exit Polls in Gujarat predicted 108 seats for the ruling BJP followed by over 70 seats for Congress as the high-voltage electoral fight between the two ended with the completion of voting in the second and last phase of Gujarat poll on Thursday.

While a Republic TV-C Voter poll survey predicted 108 seats to BJP, it gave 74 to Congress in the 182 seat Gujarat Assembly.

In 68-member Himachal Pradesh Assembly, BJP is set to win handsomely bagging 47 to 55 seats as against 13 to 20 by Congress, according to Exit Polls.

Around 65% voters from 93 constituencies turned out in the second phase of the poll in Gujarat, reports said.

The first phase of the poll was held in 89 seats on Dec 9.

While the ruling Bharatiya Janata Party (BJP) is fighting hard to retain their strong hold in the state, the Congress is trying to return to power after 22 years.

The Congress fought the election in an alliance with Hardik Patel-led Patidar Ananmat Andolan Samiti (PAAS).

The counting of votes will be held on Dec. 18.

The saffron-brigade is in power in the state since 1995.