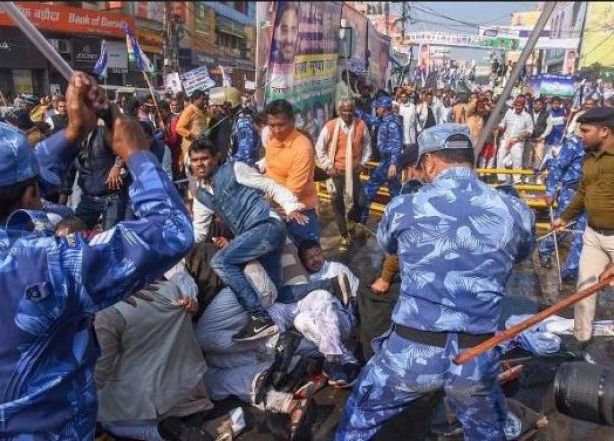 The RLSP, as part its plan, had taken out “Jan Akrosh March” in the state capital seeking improvement in the academic condition in the state.

However, as the march being led by Kushwaha reached the Dak Bungalow intersection, the police prevented the protesters from moving forward which was opposed by the protesters, leading to clashes between them.

Subsequently, the police used water cannon to disperse the mob but finding unsuccessful in their attempts, they finally resorted to baton charge, wounding many protesters, including Kushwaha.

As per reports, Kushwa was hit on his head, back and hands. Angry Kushwaha reacted by staging at sit-in at the site but had to be admitted to the hospital after his condition deteriorated, party leaders said.

“The police resorted to baton charge at the behest of chief minister Nitish Kumar. This government is anti-poor and anti-education. We were protesting on the streets seeking for reforms in the existing education system for which we had already intimated the local district magistrate. If he didn’t want it, he must have conveyed to us,” Kushwaha told the media.

Kushwaha served as a  minister in Narendra Modi government till recently but after his differences with the BJP leadership, he later quit the NDA and joined the opposition Grand Alliance.