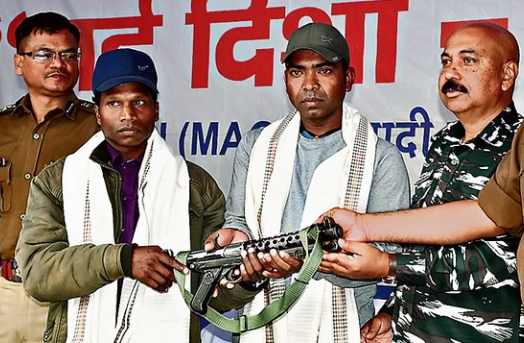 PATNA—A Maoist’s love for his daughter has done what the police failed to do all these years—in the past 25 years! Sounds incredible but a dreaded Maoist carrying a reward of Rs10 lakh on his head surrendered before the police in Jharkhand just because of a very touching letter from his teenage daughter.

Maoist Suresh Singh Munda who faced 67 cases pending against him had become a major headache for the police who failed to nab him despite all efforts. Since 1997 when he was recruited into the Red army, he had been overactive in the forest areas of mineral-rich Jharkhand.

Alarmed at his activities, the security forces announced a reward of Rs10 lakh on his head and hoped the attractive cash award will prompt villagers pass on information about his movements, leading to his arrest. The cops also laid several traps to catch but everything went in vain.

However, an emotional missive from his daughter has worked wonders now as he finally laid down his arms on Tuesday to return to the social mainstream and stay with his darling daughter.

“Papa, janm ke baad se maine aapko kabhi nahin dekha. Jab main chhoti thi to maan chal basi. Please surrender kar dijiye (Papa, I haven’t seen you since my birth. Mother too is no more to take care of me and I’m not sure if I will ever meet you. Please surrender),” the 14-year-old daughter wrote in her letter to the Maoist father.

She added that he only had been wandering here in there and all the time hiding from the police force to escape arrest. “Papa, why don’t you stay with me? How long will you keep wandering here and there?” she said adding she often shudders at the thought of getting killing in police encounter and never meeting him in her life.

Reports said the Maoist got so much emotional after going through the letter that he hurriedly surrendered before the Jharkhand police yesterday.

It created a poignant scene when his daughter kept on watching his Maoist father surrendering before the police while herself sitting at a little distance from him. According to girl, she only talked with his absconding father a few times over phone in the past but she never met him in person.

“The only factor behind my surrender is my daughter. She kept on writing emotional letters to me at repeated intervals,” Munda told the police. According to him, he didn’t join the Maoist outfit on his own; rather he was picked up by a gang of dreaded Maoist Kundan Pahan while he was only six-year-old.

Pahan who faced 128 cases and carried a reward of Rs15 lakh on his head, surrendered in 2017. He unsuccessfully contested the last assembly elections in Jharkhand as an independent candidate.