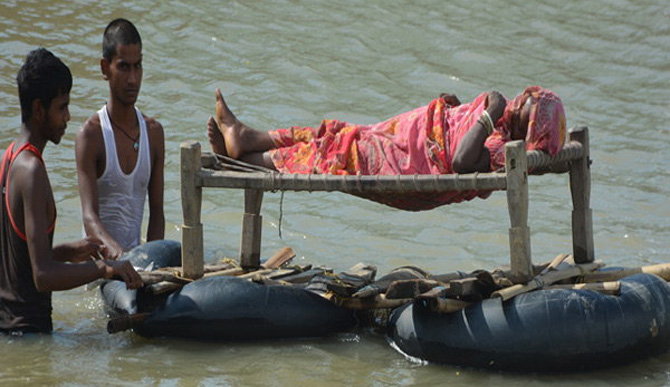 PATNA: This photograph is self-explanatory.

This says how the health conditions remain a matter of grave concern in the eastern Indian state of Bihar.

The prevailing situation is such that the government has no foolproof plan to help the patients during the time of emergency, such as floods.

This was amply visible at flooded Dimha-Diyara village in eastern Bihar’s Bhagalpur district on Wednesday when a villager had to depend on a “jugaadu” (temporary solution) technique to save life of a family member when she became ill.

With the entire village submerged in flood waters and no help coming from the state authorities, the sons prepared a makeshift “water ambulance” to carry their sick mother to the hospital.

They prepared the “water ambulance” by pumping air inside two old tubes and holding them together with bamboo sticks to keep them afloat.

Subsequently, they put the cot with the patient lying over it on the floating tubes and safely carried her to the nearby government hospital wading through the waist-deep water.

Although the Nitish Kumar government has done a lot to improve the existing health facilities in the state leading to increase of number of patients visiting government health centres, the prevailing situation leaves much to be desired.

As per an official report, an average 4,675 people were visiting the government health centres in the state in 2010. This went up to 9,871 in 2014, indicating the sharp increase in number of patients visiting government hospitals.

That means there are about 11 health centres at every 100,000 population in the state, according to a report of Bihar government’s own Economic Survey- 2015-16.

Scourge of unemployment: Over 500,000 apply for sweepers’ jobs in India