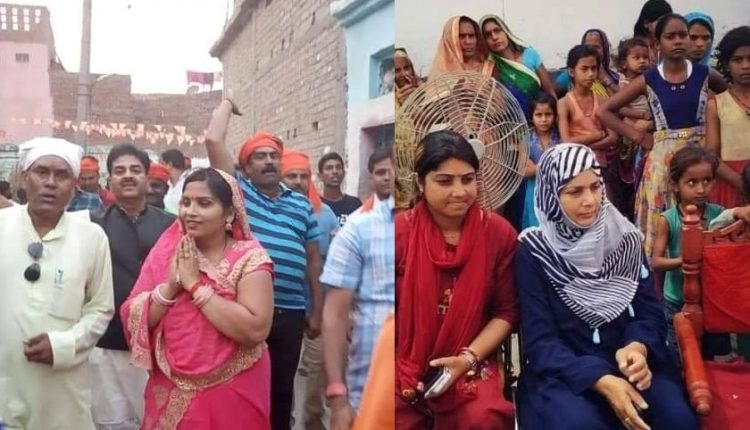 PATNA: One is sari, other in burqa; one dressed in saffron attire, other in green; one a state lawmaker, other a housewife. But there is an interesting similarity—both are wives of dons! Believe it or not, the husbands of both of the women face serious criminal charges and hence they themselves cannot contest elections!

Yes, we are talking about Siwan Lok Sabha seat—once known as the fiefdom of jailed Rashtriya janata Dal (RJD) politician Mohammad Shahabuddin—which will go to poll in the sixth phase on May 12.

The battle for Siwan, the home of India’s first president Dr Rajendra Prasad, has indeed turned very interesting with the two women—Kavita Singh and Heena Shahab, wives of two dreaded dons, making rounds of the lanes and by-lanes of the villages falling under this constituency in the sweltering heat and seeking for votes.

Kavita Singh is wife of don Ajay Singh whereas Heena Shahab is wife of Mohammad Shahabuddin now lodged in high-security Delhi’s Tihar jail in connection with murder of a journalist. While Kavita is contesting as NDA candidate, Heena is fighting on RJD ticket.

Heena Shahab had been constantly contesting elections since her husband was disqualified from joining poll process after his conviction in murder case. She tried her luck in 2009 and then 2014 Lok Sabha polls but luck has not favoured her so far.

This time again she is contesting elections and hopes to bank on the support of Yadavs, Muslims, Kushwaha, Sahni and Dalit voters for various caste chieftains now being part of the RJD-led opposition Grand Alliance.

Kavita Singh, on the other hand, expects to get support of upper castes, Kurmis and dalit voters and the plus point for her is that Bihar chief minister Nitish Kumar is now a part of the NDA after five years.

Yet one thing that seems going against her is the lack of interest being shown by the sitting BJP parliamentarian Om Prakash Yadav, local voters say. For the past two terms, Yadav had been winning this seat yet he was denied ticket by the BJP this time.

Not only that, this seat has also been given to the Janata Dal United (JD-U) under the seat-sharing arrangement this time. The result is that Yadav has not been actively campaigning for the candidate and so is the annoyance among the Yadav community voters for denying ticket to the leader.

“This has given a marginal lead over the RJD candidate. If she doesn’t win the seat this time, she will never be the winner,” a senior journalist told thebiharpost.com on Friday.

Yet another advantage for her is that there is a sort of sympathy wave this time for jailing of RJD chief Lalu Prasad in the fodder scam.

Lalu Prasad applied for bail twice in the past five months but was rejected from both the Jharkhand High Court and the Supreme Court. This has disappointed his supporters, leading to consolidation of his votes.

Whoever wins the seat will be only clear on May 23 when the counting of votes will take place but one thing is clear that the entry of dons’ wives has made the contest for Siwan indeed very interesting.

SC ruling on teachers: How much it will impact NDA poll prospects in Bihar?