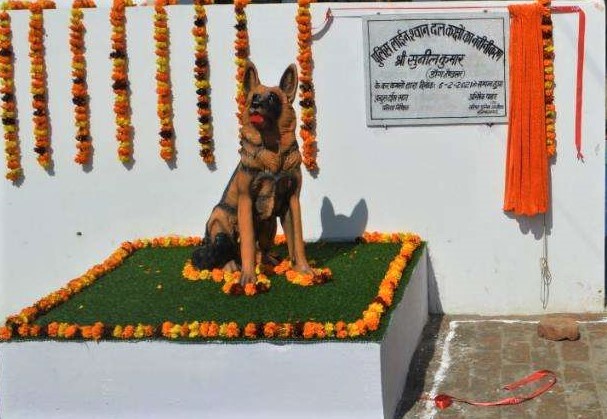 A dog which helped the police crack as many as 49 cases in India has been given the tribute in style—the police have installed a statue of the talented loyal canine right in the office of the police forces so to recall her memorable contributions!

Tinki, the brilliant German shepherd which was enjoying the status of the Assistant Superintendent of Police (ASP) with the Muzaffarnagar district police of Uttar Pradesh state, had died in November last year after battling health complications.

Tinki had died from intestine infection. The eight-year-old super dog was a member of dog squad and an asset for the police.

As a remarkable tribute to the super dog, a statue of Tinki was unveiled at the Police Line in Muzaffarnagar district on Saturday in the presence of senior police officials. The statue was unveiled by senior dog handler Sunil Kumar.

“Tinki which solved 49 cases of Muzaffarnagar police left us in 2020. As a tribute to her contributions, we have unveiled her statue,” tweeted Indian Police Service (IPS) official Abhishek Yadav. 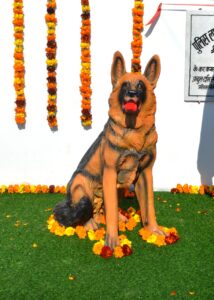 The Uttar Pradesh police also paid rich tributes to the super dog with a separate tweet. “Immortalising memories-ASP Tinki, a detective par excellence who solved 49 cases with Muzaffarnagar police left us for her heveanely abode in 2020. As a remembrance of her stellar contribution, her statue was unveiled by her dog handler in the police lines,” tweeted UP Police.

Twitter is flooded with comments for rare tribute to the super dog. “I appreciate the honour given to your cannine. Further, giving honour to its handler is an excellent idea. These trained dogs are a great force multipliers,” tweeted Col Anand Saini

Swabhimani Aawaz tweeted, “Salute late ASP M’m. You also proved that animal family can outsmart humans in every field except in selfishness and greed.” Yet another tweeted, “Great work by up police for memorial of tinki…She must be in a better place and must be happy…”

According to the police, the German shepherd was recruited in the Muzaffarnagar police force in 2014 after her formal training with the National Training Centre for dogs at the BSF Academy in Gwalior.

She was inducted as a constable and reached to the level of ASP after getting six successive promotions by the police for her spectacular ability to sniff out crime, which is a record. Police said the super dog cracked many blind cases with the Muzaffarnagar police.