Demonetisation: It seems our team didn’t do its homework properly, says BJP’s Shatru 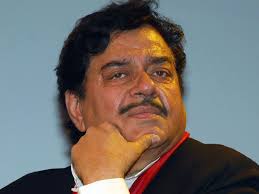 New Delhi: Expressing concern over the present economic scenario in the wake of notes ban, senior BJP leader Shatrughan Sinha said that his ‘team’ didn’t do its homework properly.

In a series of tweets, the veteran actor has urged the BJP to form a committee comprising experts to take stock of the prevailing situation.

“I have said this before and once again I maintain and reiterate my absolute faith in our PM’s sincerity, intention and great initiative to curb the menace of Black Money & Fake Currency which not only hurts the economy but also supports drugs, terror and enemies’ designs,” his tweet read.

“However, I have serious concerns about the outcome, fallout & responses of the people of India & the almost united opposition in particular,” a subsequent one read.

“It seems our team did not do it’s homework properly which is why control measures have been too little and too late. All of us are solidly behind our PM in his fight against the curse of Black Money. But what are our experts and advisors doing now?” another added.

“I’m sure many of us have read analysis of noted economist Lawrence Summers, former chief economist of the World Bank & advisor to Obama Govt. who concludes that this exercise has “resulted in chaos & loss of trust” and “without new measures, is unlikely to have lasting benefits.”,” he said.

Urging senior BJP leaders to help the government, he said, “Don’t you think it is high time & right time to form a committee of our real experts and intellectuals like Arun Shourie, Yashwant Sinha, Subramanyam Swamy & other top economists and intellectuals of our party under the stewardship of our friend, philosopher & guide LK Advaniji & veteran Murli Manohar Joshi to help the Govt in this hour.”

Sinha also said that though he is not an economist and not qualified enough to comment on the issue, he is worried like many right thinking Indians.

“I am not an economist & I don’t consider myself competent to comment on the short term and long term implications of this exercise, but I am certainly concerned, like all right thinking Indians.”

“It is for the intellectuals & experts to ponder over this & advise in the larger & best interest of the people and the nation. Jai Hind,” he added.