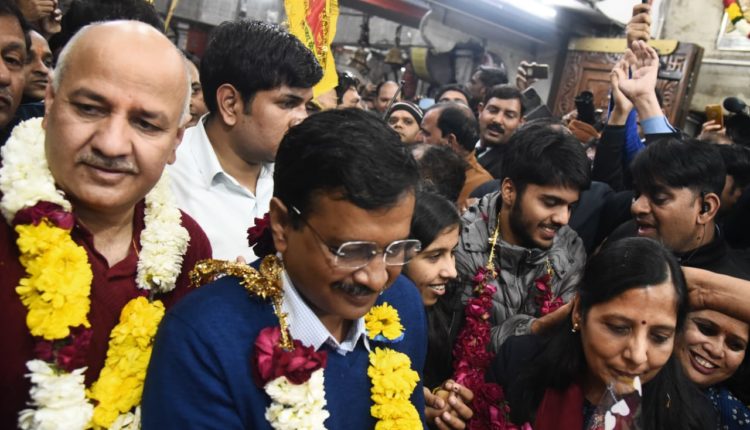 NEW DELHI: Arvind Kejriwal, anti-corruption crusader-turned-politician, led his Aam Aadami Party (AAP) to a landslide victory in the crucial state elections for Delhi results of which were declared on Tuesday.

AAP which dealt a stunning blow to ruling Bhartiya Janata Party (BJP)’s move to grab power in Delhi was on course to win 62 seats in 70-member Delhi assembly against eight won by the BJP. The Congress though failed to open its account once again.

This is the hat-trick victory for the AAP which had made a clean sweep in last 2015 assembly polls too, winning 67. The BJP had won three seats only.

The elections had turned very significant after the BJP went all out to whip up communal frenzy by frequently terming anti-Citizenship act protesters as “traitors”.

The BJP campaign turned bitterer when the home minister Amit Shah asked the voters to press EVM buttons with such force that its current is felt at Shahinbagh, site of anti-CAA protest in Delhi while another Union minister Anurag Thakur declared the “traitors” needed to be shot down.

In sharp contrast to the BJP, the AAP focused its campaign around development and never lost its track till the end. The AAP didn’t react even if the Kejriwal was termed as “terrorist” by the BJP leaders.

Instead, Kejriwal asked the masses not to vote for him if they find him as a “terrorist”.  Eventually, masses delivered their huge mandate to the AAP in an outright rejection of the BJP.

In the election year, Bihar CM Nitish Kumar goes too closer to BJP