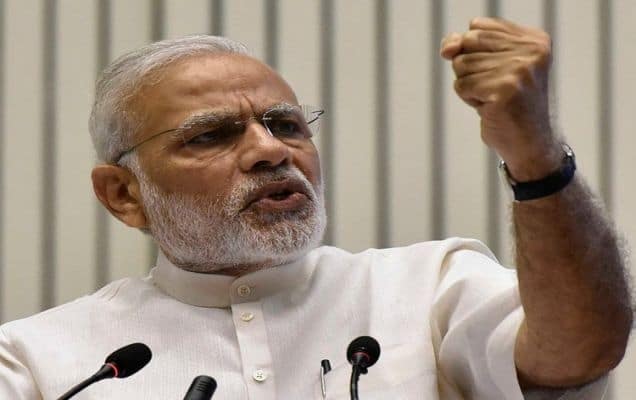 New Delhi: A 30 member delegation of the All Jammu and Kashmir Panchayat Conference called on  Prime Minister Narendra Modi, at 7 Lok Kalyan Marg here on Saturday.

The organization represents 4000 village Panchayats of Jammu and Kashmir, with 4000 Sarpanches and 29000 Panches.

The delegation was led by the Chairman of the All Jammu and Kashmir Panchayat Conference Shafiq Mir.

Members of the delegation briefed the Prime Minister on development issues concerning the State, and said that benefits of central assistance to the State have not reached the villages due to non-empowerment of the Panchayats, in line with the rest of the country.

They also submitted a memorandum.

They urged the Prime Minister to consider extension of the 73rd and 74th Amendments of the Constitution of India – which pertain to local bodies – to the State of J&K.

They also demanded that elections to Panchayats and Urban Local Bodies in the State be held at the earliest.

They said that elections held in 2011 had witnessed enthusiastic turnout of voters.

Extension of these Constitutional Provisions to the State would empower the Panchayats to undertake basic development activities in the rural areas, they said.

Members expressed hope that this would accelerate the development process in the State, and enable the people of the State to take benefit from various Central Government schemes.

The delegation apprised the Prime Minister of the prevailing situation in the State.

They strongly condemned the burning of schools by anti-national elements.

The body, which represents people at the grassroot level in Jammu and Kashmir, reiterated its faith in the democratic institutions and processes in the country.

Shafiq Mir said that a vast majority of the people of the State wanted a life of peace and dignity. He said vested interests have exploited youngsters and are playing with their future.

He urged the Prime Minister to take personal initiative to restore peace in Jammu and Kashmir.

The Prime Minister assured the delegation that the Union Government will look into their demands.

He stressed that growth and development of Jammu and Kashmir is high on his agenda.

He reiterated stress on a humanitarian approach, and said that ‘Vikas’ and ‘Vishwas’ will remain the cornerstones of the Union Government’s development initiatives for the State of Jammu and Kashmir.