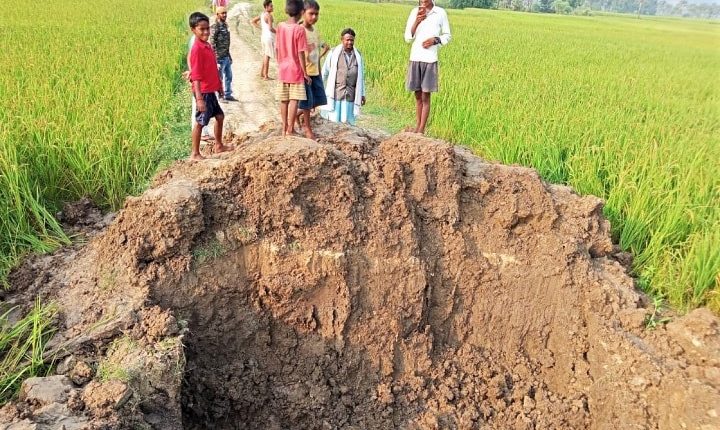 PATNA— Patna: Candidates are behaving hysterically and venting their frustration in an idiosyncratic manner after losing the village council elections in Bihar. The state is holding elections to elect 255,000 representatives, including Mukhiyas or village council chiefs which are considered very lucrative posts.

In one such bizarre incident, a candidate from Bihar’s Gaya district dug out a road connecting around a dozen villages to express his anger over his humiliating defeat in the elections. He blamed the local villagers for not voting for him despite giving them assurances.

Reports said 16 candidates had thrown their hats in the ring for the post of village council chief for Tetar village council from Gaya’s Mohra block. Dhirendra Yadav was one such candidate quite hopeful of winning the elections and he had a strong reason for this.

Yadav had donated his land to construct a road in the areas to help villagers have access to their homes even during the rainy season when many areas remain cut off from the town due to severe water-logging or floods. Perhaps, never in his wildest dream he had thought that he would face the poll disaster.

Angry at his defeat he got his supporters bring a JCB machine and dug out the main road which links around a dozen villages in the areas. The 4-5-feet wide and 10-feet deep pit has now caused severe communication problems to the local villagers who have declared to report the matter to the district authorities for such an stupid act.

“This is simply an idiotic act for which we are going to register a formal complaint with the local administration. It is out discretion to vote for the candidates of our choice. We can’t be compelled to vote for a particular candidate under pressure,” a local villager Suresh Yadav told the local media. The newly-elected village council chief Shilpi Singh has already reported the matter to the local authorities, seeking action against the candidate.

A similar incident had been reported from Barabanki district of neighbouring Uttar Pradesh where a candidate dug out the road in an area of around 200 meters using a JCB machine soon after losing the village council polls held in May this year.

The road was built by the candidate Deepak Kumar Tiwari during his tenure as the village council head. The candidate was particularly angry over the way he finished third after the counting of voters.

In another incident, a woman candidate has disrupted potable water supply in several villages of Bihar’s Nawada district after losing the village council polls. Vineeta Devi acted angrily and cut the water supply line moments after she lost the elections. The disruption in water supply has caused serious water crisis for the villagers.

According to villagers, the said pipeline was laid under the government’s sponsored “Water to Every Home” scheme during her tenure. But now she accuses the villagers of ditching her in the elections. She had won the 2016 village council polls.