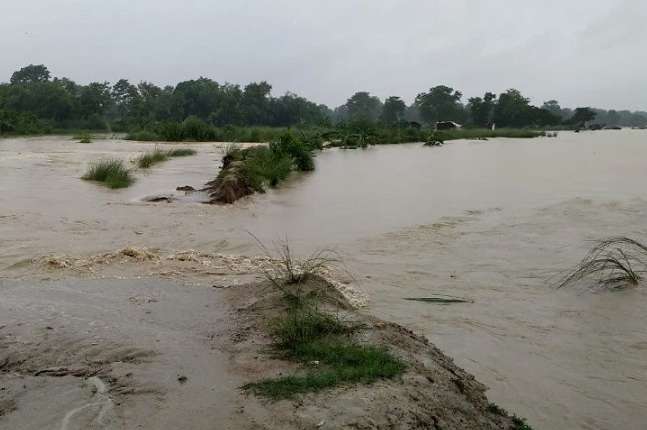 PATNA: Villagers are moving to safer places after many districts of Bihar now in grip of floods following heavy rains continuing for the past about a week. Floods have claimed around a dozen lives so far although the disaster management officials confirm only two flood-related deaths.

Of them, the flood situation is reportedly critical in Sitamarhi where the authorities have closed down all schools in the district till July 20. The situation further worsened on Saturday after one embankment of Bagmati river breached, inundating many areas.

At several places in Sitamarhi, some two-to-three feet water is flowing on the road, reports received from the district said.

In remaining districts, the villagers are fleeing to safer places as the flood waters are entering many areas. Apart from these districts, several other districts, such as East Champaran, Muzaffarpur, Siwan and Gopalganj too are facing flood-like situation.

Authorities said they are evacuating the affected villagers and setting up community kitchens for those who are unwilling to move. “We have set up 16 community kitchens so far,” Bihar disaster management’s principal secretary Pratyay Amrit told the media on Saturday.

Floodwaters have also disrupted road and rail traffic while stagnant water has badly affected normal life, almost confining the residents to their homes.

At presently, all major rivers such as Baghmati, Gandak, Kamla Balan, Kosi and Mahanada are flowing in spate owing to the continuing heavy rainfall while the weathermen has predicted heavy rains in the next 24 hours in the north and east Bihar.

Alarmed at the prevailing situation, Bihar chief minister Nitish Kumar on Friday held a meeting with officials of the water resources and disaster management departments and asked them to be ready for any emergency-like situation.

Water resources minister Sanjay Kumar Jha said his department has built a massive network of some 3,800 Kms of embankments, so far, to contain and regulate flood water in the state.

“For the Kosi, Baghmati-Adhwara basins, we have already installed a 72-hour early flood warning facility. Next in line is the Gandak basin,” the minister said on Saturday adding they were also close to putting up a Real Time Data Acquisition System in 5 river basins and 18 reservoirs in the state.