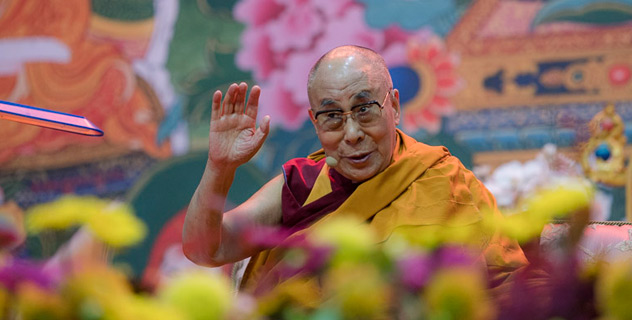 He poured his heart out while preaching his devotees at the 34 Kalchakra puja being organized here since January 2.

Dalai fled Tibet, his homeland, in 1959 after a failed uprising.

“As a Tibetan, although I retired from political affairs in 2011, I’m concerned about keeping Tibet’s language, religion and culture alive, as well as protecting the country’s natural environment,” Dalai told his devotees on Thursday.

“Today, the Tibetan language is the medium best suited to accurately rendering the nuances of Buddhist philosophy,” he said

Turning to philosophy of life, he advised the Buddhists to implement the Dharma in practice.

“We all want happiness not suffering and happiness comes about when we discipline the mind,” he said.

Reminding the crowd that all 7 billion human beings alive today were born the same way and will die the same way, he stressed that whether “you have happiness or suffering depends on whether you discipline your mind. This is what differentiates Buddhism from other religious tradition”.

He observed that many problems “we face in the world today are of our own making because we insist on highlighting divisions of nationality, race, faith, social background and so on” adding “we need to cultivate an unbiased sense of compassion, not affected by attachment that is capable of seeing that even our enemy deserves happiness”.