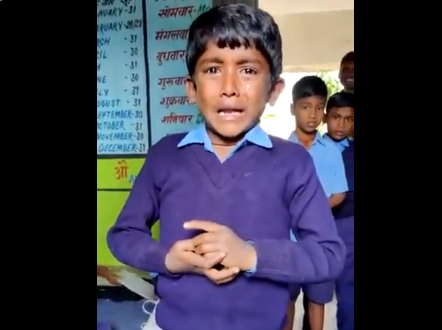 The boy who studies in a upgraded middle school in Rohtas’s Tilauthu block had been asked by the teacher to come with books yet he didn’t follow the advice.

On being asked by the teacher as to why he was not bringing books, the little boy starts crying in the class and tells the class teacher that how his father had spending the money for buying books credited to his bank account on rather buying liquor.

His sister who studies in the same school too reveals similar thing as his father who stands before them denies the allegation. A video of the crying boy has now gone viral on social media.

On Friday, Bihar chief minister Nitish Kumar led the state government officials in taking the oath that they would not consume alcohol in life.

The state imposed total prohibition in April 2016 yet the recovery of liquor bottles from across Bihar has alarmed the state administration.