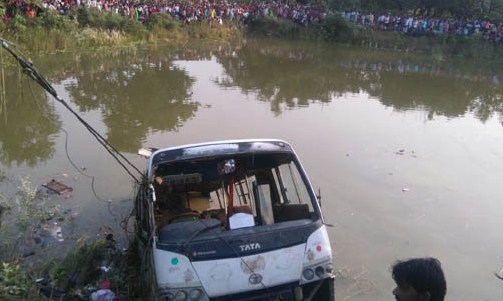 PATNA: Rescue teams in Bihar have recovered 30 bodies so far after a massive search operation launched when a crowded bus fell into a roadside pond on Monday afternoon.

“So far 30 bodies have been fished out and the ill-fated bus has also been pulled out but our search operation is not over,” a disaster management official told the media today.

A bus with around 50 passengers was on way to Sitamarhi district from Madhubani when it lost its control and jumped into a road-side pond, killing nearly all.

Witnesses said most of the passengers died as the bus remained submerged in water for over two hours before the rescue teams could start operation.

Bihar chief minister expressed grief over the incident and announced compensation to the victims’ families.